I saw a meme a few days ago that reminded me of an important fact—slavery and even more recently the civil rights era was not that long ago. One can argue that a lot of the rights Black people fought for in the past continues to be fought for today—causing one to consider whether the “negro problem” has improved as much as it should have at this point.

Sure, black people have the same rights as white people—on paper, but what good is a piece of paper when it is not representative of the reality many people of color face each day?

Some can argue that it may be even more frustrating to fight for rights we “have”, as opposed to ones we don’t—especially when our fight is for a right at the core of humanity—the right to live to see another day.

While we have individuals, protestors, and organizations/movements such as Black Lives Matter working tirelessly for what should seemingly be a 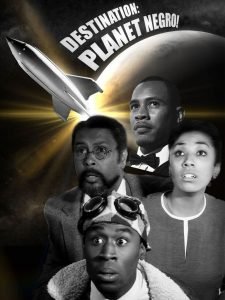 simple request—the right to live until trial—there are those who wonder will we ever get a break here?  Will we ever really matter, or is it time for us to go elsewhere?

The contrast (or lack thereof) between the “Negro problem” then and now and its potential solutions is the issue at hand in Kevin Willmott’s (co writer of Spike Lee’s Chi-Raq) satirical film Destination: Planet Negro.  The film begins with a meeting of minds; where influential African Americans such as W.E.B. DuBois, Dr. Mary McLeod-Bethune and George Washington Carver discuss a potential solution for the negro problem—leave Earth.

However, as the saying goes; “running away from your problems is a race you’ll never win”, and in Destination: Planet Negro, that saying definitely holds true.

As it would turn out, leaving planet Earth during the 30s is not as cut and dry as it seems—and during a test flight into space, a chance encounter with a wormhole puts the crew of three dab smack in the middle of modern day America—where the negro problem is still alive and well with a whole host of new problems to navigate as well.

In addition to viewing the film, I had a chance to speak with Willmott about his inspiration behind the film.  In light of the recent and far too frequent instances of police brutality, and the overall system of oppression that continues to compound the black community, I wanted to get a sense of his creative process, and his decision to use satire fused with elements of science fiction to approach the seriousness of racism.

Willmott attributes much of the inspiration behind the film to his parents. “A big part [of it] was I had older parents. My father was born in 1898—he was 60 when I was born, and when President Obama was elected they had both passed, so I thought a lot about what they would think.  Because, the joke was always–if they elect a black president he’d get shot the next day [laughter]. The other part is I really loved the old sci-fi movies as a kid.”

“I loved the notion of how black folks have always tried to find a way to solve the problem of racism.  You know that scene in the beginning, when all the leaders are trying to figure out the best way to go?  So really, trying to find a way to put all that together and address how far African Americans have come–and how far we have left to go.”

Because the film contrasts the African American community during the 1930’s and now, there are of course some cultural clashes that occur.  Between the difference in the way younger African American dress now, to the use of the “N” word, Willmott wanted to start a dialogue on these differences with tact and respect for both sides of the “conflict”. 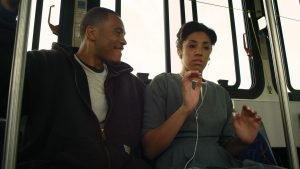 “The bigger point is not forgetting where we come from.  Not losing track of the struggle that has gotten us here.  The “N” word discussion—that’s the one I think we could talk more about.  I really like the line [in the film] that Race (Tosin Morohunfula) says, “that’s the word they call us right before they kill us” and B-12 (Trai Byers, Empire) says “oh they do that here too.”  I’m trying to make the point that we need to kind of look at this in a deeper way. And maybe from an outside perspective–from people from 1939–maybe there is something we can learn from that.”

“Like the rappers in the film—it’s not that they transcend race, but they blur those lines a bit.  It’s a sign of progress–but it’s a complicated thing, and one that deserves further discussion” he continues.

When it comes to tough topics like racism in America there are those from both within and outside of the African American community who feel like we need to move on from such topics.  I was curious as to Willmott’s response to such criticisms in light of the concepts addressed in his film.

“All the other ethnic groups that go through intense struggles like we have–they never forget.  It helps define the present.  One of the points I try to make in this film is–you can’t get away from that.  You know, the way history works–all the things that the Black Lives Matter people are doing now–those are things that were being done in the 60’s, 50, 30s, 20s, and obviously in slavery.”

“We just have video cameras now to capture those horrible incidents.  Police brutality came out of slavery–the whole concept of police came out of slavery–there was no such thing as police until slavery.  So, that is such a great example of how we can’t complain about racism and not be able to educate people about it. I mean maybe that’s just the educator in me, but no one teaches us about slavery in school and no one teaches us about Jim Crow. One of the ways we can really try to compensate for that is through film.”

One of the most intriguing elements of speculative fiction is in the genre’s name itself— “speculate”.  From considering ideas such as life on a different planet, life as a different being, or life in a different time—science fiction often provides the most suitable palette for sorting out the “what ifs” of life creatively.  This is exactly what Wilmott wanted to do in the film.

“I try to show how the past is present all around us today.  You can’t escape the past–the more you try to escape the past the more it will come back to haunt you, and possibly destroy you. In the beginning of the film, when they’re obsessing over their move to the future—they talk about how everything in history is what got us here today.  You can examine that in your own personal life and think about how things would have been had you went this way or that way, [and you would see] that you would have had a very different life–and often a far more destructive life.  And that’s the way I think the world works—period. So hopefully, dealing in “what ifs” I’m able to make the invisible, visible.”

Destination: Planet Negro is available on Video On Demand now.   You can watch the official trailer below, and learn more about the film at www.planetnegro.com.