Check Out ‘The Get Down’, A New Superhero Series About The Birth of Hip Hop
0 Comments 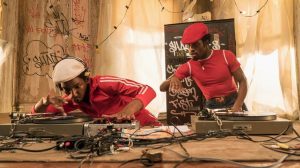 Mamoudou Athie, left, and Shameik Moore in “The Get Down.” Credit David Lee/Netflix

Netflix has released a brand new series based on the birth of hip hop that takes place in the South Bronx. “In The Get Down, Grandmaster Flash (an adviser to the show and also a character played by Mamoudou Athie) is the Yoda figure, a spiritualist and font of knowledge who’s training Shaolin Fantastic in the art of D.J.ing. When Grandmaster Flash is first revealed in the pilot, it’s done slowly. Up until that point, Shaolin Fantastic is painted as the show’s idol, all fleet moves and fast hands. But the moment Grandmaster Flash appears, the focus shifts — he’s lit from behind, forcing the eye to take an extra moment to properly register him. “The backlight,” Mr. Luhrmann said, “softens the image and is slightly blinding. From Shao’s point of view, it’s like the sun is shining from behind his head.” 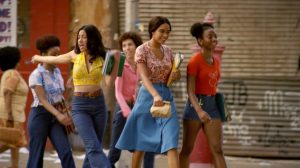 From left, Shyrley Rodriguez, Herizen Guardiola and Stefanée Martin in “The Get Down.” Credit Netflix

“The Get Down” is more like a secret superhero story, one with black and brown teenagers as the heroes. Using extravagant camerawork and technical tricks that present the protagonists as larger than life, “The Get Down” takes a period and place that’s often approached with dutiful naturalism and sobriety about difficult circumstances and infuses it with light touches of magical realism and bursts of palpable otherworldly joy.” Read more here.