Does New Horizons’ Next Target Have a Moon?
0 Comments 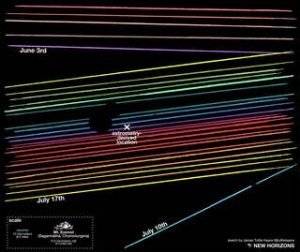 object a billion miles past Pluto — might be either peanut-shaped or even two objects orbiting one another. Now new data hints that 2014 MU69 might have orbital company: a small moon.

That’s the latest theory coming from NASA’s New Horizons team, as it continues to analyze telescope data on the target of a New Year’s Day 2019 flyby. “We really won’t know what MU69 looks like until we fly past it, or even gain a full understanding of it until after the encounter,” said New Horizons science team member Marc Buie, of the Southwest Research Institute, Boulder, Colorado, who offered an update on the analysis of MU69 Monday at the American Geophysical Union Fall Meeting in New Orleans. “But even from afar, the more we examine it, the more interesting and amazing this little world becomes.” 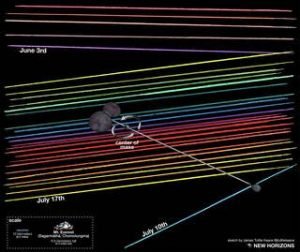 On three occasions in June and July 2017, New Horizons mission team members attempted to track a small, distant Kuiper Belt object, 2014 MU69, as it passed in front of a star – an event known as an occultation. The colored lines mark the path of the star as seen from different telescopes on each day; the blank spaces on those lines indicate the few seconds when MU69 blocked the light from the star. Scientists are using these observations to craft a picture of MU69 and any companion bodies. Credits: NASA/JHUAPL/SwRI/James Tuttle Keane

The data that led to these hints at MU69’s nature were gathered over six weeks in June and July, when the team made three attempts to place telescopes in the narrow shadow of MU69 as it passed in front of a star. The most valuable recon came on July 17, when five telescopes deployed by the New Horizons team in Argentina were in the right place at the right time to catch this fleeting shadow — an event known as an occultation – and capture important data on MU69’s size, shape and orbit. That data raised the possibility that MU69 might be two like-sized objects, or what’s known as a binary.

The prospect that MU69 might have a moon arose from data collected during a different occultation on July 10, by NASA’s airborne Stratospheric Observatory for Infrared Astronomy (SOFIA). Focused on MU69’s expected location while flying over the Pacific Ocean, SOFIA detected what appeared to be a very short drop-out in the star’s light. Buie said further analysis of that data, including syncing it with MU69 orbit calculations provided by the European Space Agency’s Gaia mission, opens the possibility that the “blip” SOFIA detected could be another object around MU69.

“A binary with a smaller moon might also help explain the shifts we see in the position of MU69 during these various occultations,” Buie added. “It’s all very suggestive, but another step in our work to get a clear picture of MU69 before New Horizons flies by, just over a year from now.”

That flyby will be the most distant in the history of space exploration. Ancient Kuiper Belt object MU69, just discovered in 2014, is more than 4 billion miles (6.5 billion kilometers) from Earth. It appears to be no more than 20 miles (30 kilometers) long, or, if a binary, each about 9-12 miles (15-20 kilometers) in diameter. Like other objects in the Kuiper Belt, MU69 offers a close-up look at the remnants of the ancient planet-building process, small worlds that hold critical clues to the formation of the outer solar system.

“The occultation effort that Marc Buie and his team led for New Horizons has been invaluable in opening our eyes to the very real possibilities that MU69 is both a lot more complex than anyone suspected, and that it holds many surprises for us at flyby on New Year’s Eve and New Year’s Day, 2019,” added New Horizons Principal Investigator Alan Stern, also from Southwest Research Institute. “The allure of its exploration is becoming stronger and stronger as we learn more and more about it. It’s just fantastic!”