For all of you lucky guys and gals fortunate enough to head up to The Big Apple this weekend for New York Comic Con 2016, we wanted to provide a guide of sorts.

A schedule that #blerds could use to navigate the sea of fanboy/ fangirl fervor that will be in huge quantities through the 4 day (Oct 6-9) celebration of pop culture.

Here are a few top panels/ events to choose from throughout the long weekend: 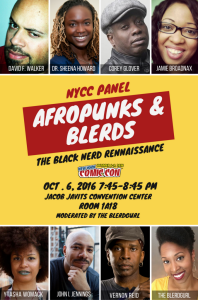 Via the New York Comic Con website, “Throughout pop culture, Black voices are making themselves heard in a variety of mediums, defying the stereotypes of what it means to be Black. With a line-up of Panelists that includes comic writers David F. Walker (Marvel’s Power Man and Iron Fist), Eisner-winning scholar Dr. Sheena Howard (Black Comics: Politics of Race and Representation), Grammy-winning musicians Vernon Reid and Corey Glover (Living Colour) and more, this Panel explores the intersections of racial identity and creative expression during a crucial time in American history.” 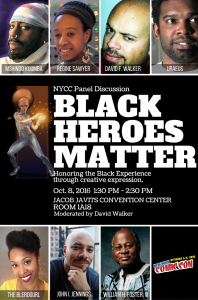 Via New York Comic Con, “In a time when issues of racism continue to plague America, it is more important than ever to see Black heroes in popular media and to understand the value of Black lives. Join this group of creators in a lively conversation about increasing visibility, building community and honoring the Black experience through creative expression.”

Growth and change in 2016 catapulted Lion Forge/Roar Comics onto comics’ center stage. That was just the beginning! Be the first to discover what Lion Forge plans for 2017 and beyond with industry-shaking announcements. Join Geoff Gerber (Lion Forge President), Rich Johnson (Lion Forge VP of Sales, Marketing, and Business Development), Mark Smylie (Lion Forge Executive Editor), Joe Illidge (Lion Forge Senior Editor), Andrea Colvin (Roar Senior Editor), as well as some of the top talent in the industrytalk about what’s next for Lion Forge!” 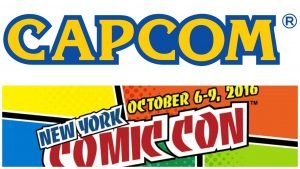 Capcom is descending upon New York Comic Con 2016 this weekend with terrifying horrors in VR for Resident Evil 7, zombie slaying madness in Dead Rising 4, and frightening new looks for iconic fighters in Street Fighter V. Visit Capcom at booth #1420 to check out playable demos of these exciting games.

These are just a sampling of some of the many events that will be taking place at the convention, so stay tuned to BlackSci-Fi.com for daily updates/ news as it drops.

For more details on the convention head to http://www.newyorkcomiccon.com/Events/Panels-And-Screenings/View-All/#.