For Throw Back Thursday (#TBT) we’ve gone to the BlackSci-Fi.com archives and pulled a fantastic interview with Nichelle Nichols of Star Trek fame, which ran in March of 2011 . Please read and enjoy this exclusive chat with one of the leading women of BlackSci-Fi, Ms. Nichelle Nichols. 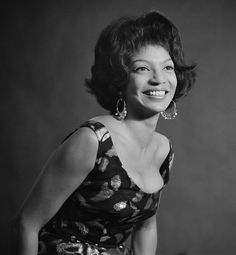 Before Zoe of Firefly, before Niobe of The Matrix: Revolutions, before Jr. Lt. Dualla of Battlestar Galactica, and before Lt. Vanessa Damphouse of Space: Above & Beyond there was Lt. Nyota Uhura.

With the creation of Star Trek in 1966, Gene Roddenberry brought to audiences a sci-fi epic, which acted at times as an allegory for the racial and social strife of 1960s America. Roddenberry, in his infinite wisdom, went a step further, introducing Nichelle Nichols as Lt. Uhura, the chief communications officer of the Starship Enterprise.

Here was a black woman holding her own as one of the key crew in this galactic voyage, in a time when a large portion of the nation viewed African Americans as second-class citizens. In this key role, Ms. Nichols’ well defined portrayal of Lt. Uhura would inspire countless young black youth, including a South Side Chicago teenager named Mae Jemison to become the first African American female astronaut to travel to space.

In celebration of Women’s History Month, Ms. Nichols recently sat down and spoke with BlackSci-Fi.com about her wide-ranging career.

BlackSci-Fi.com: How are you doing today? 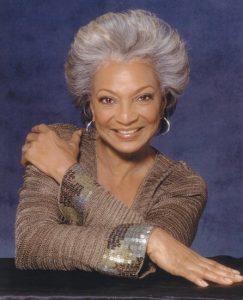 Nichelle Nichols: I’m doing great, thanks for asking. My days are really busy, but in a good way. I have a number of projects that are ongoing and most days are filled with hectic but exhilarating and interesting activities that keep me running.

BSF.com: At an early stage in your career you performed with both the Duke Ellington and Lionel Hampton bands. How was the experience for you, as a performer?

NN: They were the masters! I was fortunate to be exposed to these geniuses as a young performer, and I used the opportunity to learn everything that I could from them. One of the many lessons that I learned from these men was to take my craft seriously and to continue to work to get even better.

BSF.com: What is it about music that interests you, and do you still pursue musical projects?

NN: Music is my soul. It has sustained me throughout my life. My next musical project will probably be the re-staging of my one-woman show in which I become 10 to 12 legendary black women entertainers who were my idols when I was growing up.

BSF.com: Switching gears a bit, how were you chosen for the role of Lt. Uhura? 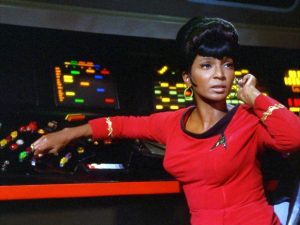 NN: I was working in Europe and had no plans to return stateside for awhile when my agent contacted me. He told me about a TV series called Star Trek. I didn’t know what a Star Trek was, so I told him that I really wasn’t interested in coming back for that. He then offered to purchase a round-trip first class airfare for me to come back to LA to read for this show, and if I didn’t get the part I could keep the ticket and return to Europe. However, if I got the part he wanted his “cotton-pickin’ money back!” It was an offer I couldn’t refuse.

BSF:com: Can you describe the initial reaction to your role from audiences, especially with being one of the few prominent African American female actresses on network television at the time?

NN: From the thousands of viewers who watched Star Trek, the reaction to my role was amazingly positive and the legions of Uhura fans grew from there.

BSF.com: Can you provide some insight on what led to the meeting between you and Rev. Dr Martin Luther King Jr., and its results?

NN: I have told this story many times, so forgive me if you’ve already heard it.

For those that haven’t—Dr. King was instrumental in my decision to remain with the series. I had decided to leave the series because I was getting other offers that I wanted to pursue. I gave my notice to Gene Roddenberry on [a] Friday. He tried to talk me out of it and asked that I take the weekend to think it over. That same weekend I had an NAACP event (I think) to attend. It was there that I was first introduced to Dr. King.

It turns out that he was a Trek fan and that it was the only show that he and his wife Coretta allowed his little children to stay up past bedtime to watch. When I told Dr. King that I was planning on leaving the show he told me in forceful tones, “You cannot do that!” Dr. King said, “For the first time we are being seen the world over as beautiful, intelligent, qualified people and you personify that person.” Needless to say, I could not leave, I did not leave and I never looked back….the rest is history!

BSF.com: Can you talk about your involvement with NASA and why you feel it is important to have increased 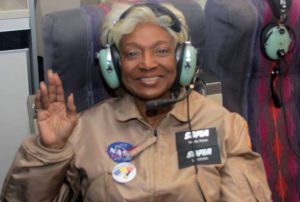 participation of minority and female astronauts within the field of science?

NN: NASA recognized that there was a need for diversity in the astronaut corps and asked me to assist. My company, Women in Motion, accepted a contract with NASA. My role as principal investigator was to identify, contact, and recruit qualified people to apply for the astronaut corps. I am very proud that under my program the first women and minorities entered the astronaut corps. These included, but are not limited to, Dr. Sally Ride, Col. Bluford, Dr. Ron McNair, Dr. Judith Resnik, and subsequent to that Dr. Mae Jemison.

It is vitally important that all young people—not just women and minorities,  but ALL of our young people–seek out education in science, technology, engineering, and mathematics (STEM). These are the disciplines that are needed to lead the world in innovations that will shape our future.

BSF.com: Was it difficult being one of “the first?”

NN: In the words of Dr. Martin Luther King, I was cast in ‘the first non-stereotypical female role on television as a highly regarded member of the Enterprise crew.’ Was it difficult? Yes and no. Was it an honor? It changed my life! 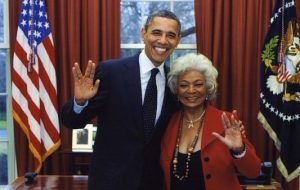 BSF.COM: What can audiences expect from you in the future?

NN: I will be starring in and serving as executive producer on the film Omaha Street, a Gilbert Bell production. This film shows the generosity of spirit and forgiveness and touches on racial fears and how to triumph over them.

BSF.com: Looking over your career, is there one particular thing of which you are most proud of?

NN: I’d say that I’m most proud of the impact that I’ve been able to have on so many lives. I have had uncountable numbers of people that have told me that they pursued their career path because they saw my portrayal of Uhura and it inspired them to pursue their dreams. You can’t beat that.