Nu-Perspective is BACK!! All caught up and ready to bring you more revamps and updates of various underutilized Nubian (black) characters. And with October here, we figured we would bring the scary with the theme of “Fearsome Characters”. And there are few characters as fearsome as this month’s first character- APOCALYPSE!! The name says it all wouldn’t you agree?

For Apocalypse, the main update we did comes with his new motivations. And the awesomeness of his physical revamp will truly shine in the color stage. In the meantime, just in case you’ve never heard of the World’s First Mutant, Google his original look and story, and let us know if you like what we did with him. Then see ya in 2 weeks with another Nu-Perspective. 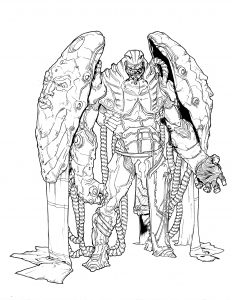 Base of Operations: Mobile

Story: Known in modern times as Apocalypse, En Sabah Nur was a genocidal tyrant raised by the brutal warlord Baal of the Sandstormers over 5000 years ago in ancient Egypt. Blessed with immortality, being nigh-unstoppable and ancient Celestial technology, Apocalypse was driven by the harsh Darwinian physiology of “survival of the fittest”. Clashing time and again with the X-Men and Earth’s other mightiest heroes, nearly bringing about the end of the world each time, En Sabah Nur met his own end repaying a debt to an ancient Celestial pact. The descendants of En Sabah Nur – known as the Akkaba Clan – cloned their ageless progenitor who was soundly murdered and re-cloned by Fantomex. Fantomex sought to raise the boy to be the opposite version of the maniacal mutant despot for a while, until eventually handing him over to the Jean Grey School for Higher Learning. “Evan” Sabah Nur came to be a part of the X-Men and X-Force, and even fought against them and the Avengers when under the influence of the Red Skull (who had Professor Xavier’s mind) and his S-Men. However, a series of ordeals, combined with a far-flung time-displaced adventure to ancient Egypt that saw Evan come face-to-face with his younger original self, pushed him over the edge towards his predestined fate. Evan embraced his Apocalyptic destiny and went on the run to reflect. He eventually returned, having fully ascended into his full Apocalypse form, with a personal revelation to share with the world. Whether human, mutant, or other, he challenged anyone to deny that crisis was the only true way to winnow out the weak and fortify the strong. To that end, Apocalypse now vowed to become the invisible hand of God and savior of man, decreeing he would orchestrate a series of world disasters, events, and physical tournaments, to accelerate the culling process. The gift to those strong enough to survive will be enhanced powers via his Celestial technology. From this controlled chaos, Apocalypse believes a unified Earth will rise up, capable of surpassing its physical and moral frailties and divisive vices towards meta-mutant evolution.

Powers/Abilities: Apocalypse is one of the most powerful beings on Earth, whose powers derive from his absolute control over his own molecular structure. This grants him a wide array of superhuman abilities inclusive of super strength, super reflexes, shapeshifting, size alteration, elasticity and nigh-invulnerability. With this ability to alter his form as it suits him, he can transform his limbs into weapons, wings, jets, etc; regenerate from fatal injuries; self-power bestowal (generating a wide range of powers at will) and adapt his body to apparently any disease or hostile environment. He can also project and absorb energy and is capable of technopathy, being able to directly interface with the various technologies he has at his disposal. He also does not require food, oxygen or sleep to live, rendering him self-sustainable and virtually immortal. Apocalypse can also augment others through his body’s genetically integrated techno-organic virus, enhancing the victim’s innate powers/abilities (or granting them) while influencing their minds into his thralls. Apocalypse also possesses a level of telekinesis, telepathy and psychic immunity, however not as powerful as other similar Omega-level mutants. While he does not have full mind control, Apocalypse can subtly mentally influence others through vocal commands once their will is sufficiently weak. He is also capable of absorbing and projecting vast amounts of energy from his being. Another ability demonstrated is that of mutant-mimicry (emulating active mutant powers via tactile contact) the limits of which are still ill-defined. Apocalypse’s blood can heal other mutants, but is fatal for humans, with his blood shown to restore his de-powered mutant descendants. Unlike previously, Apocalypse no longer needs periodic rejuvenation in Celestial-tech slumber chambers, nor hosts and consciousness transferal to extend his existence. While lacking the millennia of experience of his previous incarnation, this Apocalypse still possesses super-genius level intelligence, making him potentially a master strategist, tactician, scientist and inventor.

Paraphernalia: Apocalypse’s original armor was created from highly-advanced Celestial technology. It would in fact be this encounter and infusion that would be Apocalypse’s downfall, eroding his inherent immortality. Seeking to not make the same mistake, his new reverse-engineered armor does not have that fatal flaw, and is actually now fully organic and bonded to his body, working in conjunction with his own inherent mutant powers. The bio-armor grants added durability and an energy source to project powerful blasts as well as generate virtually impenetrable force fields. Through distorting space, Apocalypse can achieve teleportation via his armor, with a temporary disorienting side-effect.