Nu-Perspective, home of revamps and updates of various underutilized Nubian (black) characters, is back to close out October with another gem. And with Halloween here, we figured we would bring continue to bring the scary with the theme of “Fearsome Characters”. Apocalypse was a tough one to beat, but what can give you the chills more than a character who is the living embodiment of Death itself?  For this month’s second character-we give you- THE BLACK RACER!!

This character was a tough one to reinterpret…mainly due to those damn sills. Ahhhh…the 70’s. Anywho, in case you’ve never heard of this character, Google her original look and story, and let us know if you like what we did with her. Then see ya in 2 weeks with another Nu-Perspective. 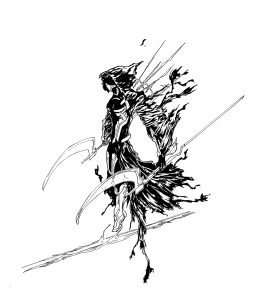 Occupation: Nurse, Psychopomp of the Gods, Herald of the Source

Place of Birth: The Source / Metropolis

Base of Operations: Mobile

Stories: Willow Walker is the daughter of William “Willie” Walker, a former U.S Army Sergeant who was paralyzed until he merged with the spirit of The Black Racer, the physical manifestation of an aspect of Death. The Black Racer harvests New Gods at the time of their death, and often hunts those associated with the Speed Force. However, Willie could not escape his own fate, and he passed after one of his collections as the Black Racer was completed. Shortly after her father’s death, Willow began having otherworldly nightmares; vivid terrors of wars between fantastical gods in planes of existence nigh-incomprehensible by mortals. Willow was then approached by the spirit of the Black Racer and was shown secrets to her father’s true past. As the reincarnation of the Forth World god of death, William had brought an end to the New Gods, but the essence of those beings found their way to Earth, reborn in mortal vessels with little to no recollection of their former lives. As her father before her, Willow bonded to the Black Racer, and must tap into the powers he once had, to stop the resurrected Darkseid from transforming Earth into the Fifth World hell-scape of Apokolips. To accomplish this, Walker must desperately find the former New Genesis gods whether they know it or not. But Willow finds herself a pariah, shunned by these new New Gods and hunted by forces more powerful than Death itself. For the first time, Death is on the run, and she’s running out of time.

Powers/Abilities: As a reincarnated “New God” Willow has access to incalculable strength, speed, stamina and durability. In her Black Racer true form she does not require food, water, rest or oxygen to live and she is effectively immortal. Nothing short of powerful Forth World technology can harm her or slow her down. The Black Racer also possesses an array of super-senses including a level of cosmic awareness and clairvoyance, particularly in regards to death and dying. As the Forth World incarnation of inevitable, remorseless and impartial oblivion, Willow can also render herself intangible and unperceivable by mortals and technology; as well as absorb the thoughts and memories of the recently deceased. The Black Racer’s most striking power is her irreversible and uncontrollable “death touch” that erodes the life force of any living being that makes physical contact with her. The Black Racer’s only known weakness besides radion (New Gods’ version of lethal kryptonite) is that she needs a living physical body to exercise existence in our reality. This transition appears to be random and requires much effort on Willow’s part to transform into her “old” New God form and single-minded mentality. When the Black Racer senses it is no longer required, she reverts to her vulnerable human form. As the daughter of a war veteran, Willow had some military training in hand-to-hand and armed combat and army procedurals.

Weapons/Paraphernalia: The Source “skiis” affixed to her feet grant the Black Racer transluminous speeds bordering on teleportation and self-propelled flight. Her cosmic sickles are used as combat weapons capable of slicing through virtually any material with the exception of a few Forth World metals and can be joined to form a two-headed scythe. The particular armor of the Black Racer protects others from unintentional exposure to her “death touch”, meaning she has to deliberately expel this power on those she chooses. It is postulated that the Black Racer’s armor may have been forged from inverted Source Wall materials, believed to be the only substance to negate her death touch.