On December 19, Open World Comics released their first video game titled Versus. As explained by the publisher, “Versus has a Marvel vs Capcom or Street Fighter feel. The characters stem from independent publishers and comic book creators. This fighter game contains specials, parry’s and with future updates, team-ups. Our goal with Versus is to fight your way through formidable opponents to save your hero’s universe. Beating each character on each level until their health bar reaches 0. After you beat the characters, you move on to fight for your final seat in the universe. ”

Versus is as far as I know the first fighting video game EVER which features a complete line up of diverse indie comic book characters. And for full discretion: the character of Stealth from BlackSci-fi.com contributing writer William Satterwhite’s web comic series of the same name, and Sean Anderson from my comic book series, Route 3 will be featured as a playable characters in future updates, along with a host of other kick butt characters from books like One Nation, Tech Watch, and All Knightz.

This is huge. Let me repeat that: THIS IS HUGE.

What developer Radi Lewis and his team at Open World Comics have accomplished since the game’s earliest inception to yesterday’s release needs to be celebrated. In a world where we are demanding representation from larger companies, the folks of Open World Comics just went ahead and did it.

Check out the official press release below for the games release, and click this link for more information about the game. 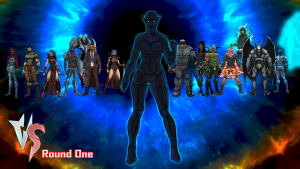 VERSUS is everything you love about Fighting games. We have Specials, Parries, Power Ups and Unique Throws.  All our characters have custom moves, voice actors and are powerful!!

So What Makes VERSUS Unique??

VERSUS Characters Come Straight Out of Independently Published Comic Books Round One is just the beginning. We are slated to add up to two characters per month to the game, in addition to a story mode and a comic book shop. Our roster is extensive and contains the best indie published characters.  The indie publishers we’ve chosen stem from across the United States and different countries like the UK and Africa.

If you would like more information about this topic, please contact Radi Lewis at Open World Comics or email at openworldcomics@gmail.com.


Robert Jeffrey II is an award-winning journalist whose work has appeared in such publications as UVC Magazine, JaDore Magazine, BlackSci-Fi.com, and The Atlanta Voice Newspaper.He was chosen as a participant in the DC Comics Class of 2017 Writers Workshop . He is a regular contributor for the Tessera Guild, and his comic book work includes client work for the Centers for Disease Control, and Nitto Tires. His comic book writing includes work on such award winning/ nominated series as his creator owned series Route 3, Radio Free Amerika, Terminus Team-Up, and Soul of Suw. He’s yet to fulfill his dream of pop-locking to save a community center.