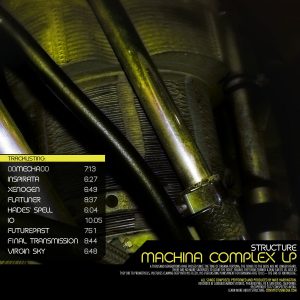 A concept album composed, produced, and performed by comic book creator, and musician Mike Harrington, Machina Complex according to the creator is “the audio soundtrack to a comic book and film project that I’m working on creating.” The album is a follow up to his creator owned comic book series Simian Soldiers.

From the album’s description: A thousand generations have passed since the time of Organa Fortuna. The songs to the gods are no longer heard. There are no more sacrifices to court the gods’ favor. They have turned a deaf ear to us just as they did to Prometheus, vultures clawing deep into his flesh, his everlasting punishment for bringing fire to us-the fire of knowledge.

According to the album’s description, Harrington was one of the first African-American students to study abroad in Cologne, Germany in the Congress-Bundestag Youth Exchange program. He has created several conceptual projects involving music, theater and his signature artwork he has come to be known for. His enigmatic persona behind his creative concepts has now led him to his current project— a complete multimedia project reaching within various entertainment disciplines of film, television, publishing and music. The Machina Complex LP furthers both this concept and his sonic vision into worlds unknown.

Check out a preview track for the album below.

You can find the album on Itunes, Spotify, Amazon Music, Juno Download by searching with keyword Machina Complex. For more information head to http://www.iamstructure.com/ and http://wellheadrecords.com/.