In late 2016, USC Film Student, Chris Ortega embarked on an honorable journey of launching a Kickstarter for the short film, PROTOTYPE that combines technology, Afrofuturism, and a female protagonist to identify issues of classism, human nature, and sexism in the black community. If you do not know, Afrofuturism is the idea of consolidating controversial topics through a sci-fi or literary lens. Afrofuturism, according to Wikipedia, “is a movement in literature, music, art, etc., featuring futuristic or science fiction themes which incorporate elements of black history and culture.” When Chris started on this path he wanted both black people and the larger community to view this race as technological agents capable of infinite intelligence and great tenacity.

In an interview with BlackSci-Fi.com Chris Ortega outlines some of his motivations for the film, his take on the viability of Afrofuturism in mainstream America, and why a film like this is so much needed to create rich, sci-fi illustrations about people from all walks of life.

BlackSci-Fi.com: Your Kickstarter reached over the projected goal. Is the money raised enough?

Chris Ortega: Certainly. The Kickstarter reached more than its projected goal of $12,000, with more than $13,000 pouring in from 180 backers, mainly friends and family. The money will be used to cover the essential needs of the project such as production, visual art, cinematography, various set locations and costumes. It was most definitely a success and a blessing that I didn’t expect. However, it is estimated that over $20,000 will need to be raised in order to set this film over the edge and to create premiere visual effects.

BSF: What were some of your motivations for the film? What inspired you to create a female protagonist?

CO:  I grew up in a family led by black women. Being raised in that type of environment really made me question the various racial relationships around me. This upbringing is what started to make me think of the black woman as the next level of the human race.

That’s what ultimately led me to create a black, female protagonist. She would be someone strong, intelligent, and someone that my little sister could look up to. My protagonist is the greatest engineer in the world. It is a story that is little seen and illustrated by directors on the film scene.

Ultimately, I really wanted to tell a story about the problems that black people face about the empathy gap from mainstream America and their issues. In my film, groups of androids are treated less than human. I wanted to question the ideas around what it means to be empathetic.

Is it possible for an android to be more empathetic than our human counterparts? Are black people capable of becoming the first group of people to create the first commercial, empathetic robot? This story challenges the idea of what it means to be human in a way that is action-packed and visually entertaining. 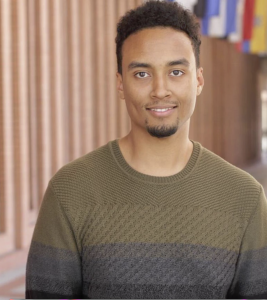 BSF: How has USC Film School aided you in creating the film and as an artist?

CO: It has been a dream come true. In 2013, I graduated from Morehouse University in Atlanta, GA with no idea this would happen. It has given me the opportunity to meet celebrities, including George Lucas. One of my mentors, Bruce Block, has given me new ways to see movies as visual expressions.

BSF: What is your take on including more Afrofuturistic themes in Hollywood? Do you think this could be a popular market in the future? If so, when and how will this come about?

CO: The market is already here. Two of my biggest inspirations, Janelle Monae and Prince have really set new expressions for Afrofuturism since the 70s. It’s time that that movement be expressed in cinema.

BSF: Do you think an Afrofuturist take will be receptive to minorities?

CO: People are tired of seeing the same sci-fi movies with the same Hollywood actors and actresses. Everyone is ready for something different. This is where my film delivers. Afrofuturism is the breath of fresh air you’ve been waiting for because you never hear stories about minorities talking about themselves in the future. This alternative form of storytelling allows conversations to be told using new vocabulary and definition to describe it. Mythology is an essential part of any culture and it affects how we see ourselves.

BSF: What are your future plans for the film? Are you looking to extend this film beyond your senior thesis project?

CO: I would love for this project to extend far beyond my senior thesis. I have many ideas for the future of this film. I fully intend to go to festivals and eventually make PROTOTYPE into a feature film.

BSF: Are you working on any other projects? Will they have an Afrofuturist theme?

CO: Right now PROTOTYPE is my main focus. I have many other ideas in the works. However, PROTOTYPE won’t be my last film with an Afrofuturist theme.

Head here and here for more information about the PROTOTYPE campaign.

Christian “Chris” Locklayer is a writer hailing from Atlanta, GA, Midtown area. She graduated in 2014 with her degree in Media and Communication Studies. In her spare time, she loves to try new recipes/foods, visit the High Museum and volunteer at the Atlanta Humane Society.