I’m sitting down to write about Regine Sawyer, who is gradually becoming one of the most important woman figures in the land of comics, and my mind is reeling. The blinking cursor of my word processor ticks away the seconds. I’m thinking.

I’m thinking about the arduous road that has been placed before women in the comic book industry. I’m thinking about struggle, about success, about women in refrigerators, about that slow grind and about glass ceilings. But mostly, I’m thinking about progress. Even just five years ago, women were still thought of as a rarity in the comic book industry. Talented women were thought to be even more elusive, despite all evidence to the contrary. I’ve come to the conclusion that this piece is not just about Regine as an individual, but about someone who is changing the game. She is part of an ever-growing lineage that is transforming the way we talk about women in comics.

She is history in the making.

Regine always had a determined attitude, the same one that would eventually lead her to start her own small press company and an international collective of women creators who are turning the game up a notch. She harkens that resolve back to her childhood, in her South Jamaica, Queens home, where she remembers filling sketchbooks with characters and story outlines day in and day out at only nine years old. She even convinced her mother to call John Romita Jr.’s office at Marvel Comics to find out if they’d buy her characters. “I was a determined kid for sure!” she says.

Regine’s father worked for the MTA while her mother was a painter, and her older brother a musician and chef. Needless to say, she was surrounded by creativity even at a young age. “We were always going places and doing things that helped to cultivate creativity; the museum one day, the meat market the next,” Regine says. “I read a lot as a child. My mother always encouraged me to read everything and soon I started writing my own stories.” She found some of her greatest inspiration in the X-Men comic books she began collecting in the early ‘90’s. “The stories were so enthralling and the images were just so striking,” she says. “I knew immediately that I wanted to draw and write my own comics.”

Her future was cemented as Regine would go on to start her own company, Lockett Down Productions. She spent more than a year working at another small press company as an editor and coordinator, transcribing and editing scripts, managing artist submissions, booking convention tables, and more. It didn’t take her long to learn the ropes and come to the conclusion that she could do it all for herself. “I decided one day that all the things that I was doing for the company, I could do for my own,” she says. Lockett Down Productions was born. 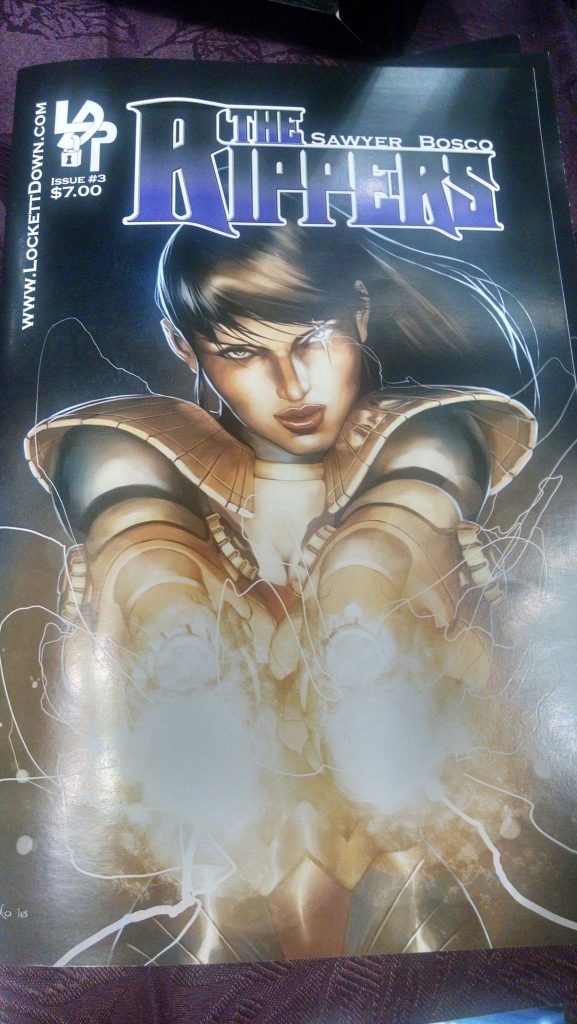 Under her company’s imprint, Regine has produced comics such as The Rippers, Eating Vampires, and the soon-to-be-released, Ice Witch. In 2012, she was approached by Ray Felix, the founder and coordinator of Bronx Heroes Con, to host a Women in Comics panel for the show that year. Regine admits to having doubts at first. “I wasn’t sure if I could do it,” she says. “I didn’t know a lot of women working in the industry at that time and wasn’t certain of how good a moderator I would be.” Ultimately, she decided to give it a try and joined eight other women on the panel. She found the stories of her fellow panelists thoughtful and compelling, but one person stood out to her the most: Alitha E. Martinez. “She had been in the industry at the time for well over a decade, penciling almost every comic book series I’ve ever heard of. I had never heard of her let alone knew that she was an Afro-Latina,” Regine says. “It boggled my mind.”

Regine is not exaggerating in the slightest when she says that Alitha has done work for just about every popular comic book series out there. We’re talking mainstream titles like Black Panther, Iron Man, X-Men, Fantastic Four, and more. In addition to some notable Marvel gigs, Alitha has also done political cartooning for the New York Post and has her own titles such as Yume and Ever, Foreign, and Ningyo, published through her own company, A Riot Storm Productions.

Alitha was prolific. So why had Regine never heard of her?

This question seemed to play into the underlying nuances of why women in comics were thought of as some kind of mythological anomaly in the industry. Regine talked to her after the show, and discovered something else that struck a nerve: Alitha admitted that she often didn’t get invited to things like panels. “It made me wonder,” Regine says, “What other women, especially those of color, who have worked in the industry for a good length of time, never had their say or were asked to speak at shows and such.”

That conversation was the spark that made Regine reach out to more women in the field. She began having more panel discussions and hosting more events, and before she knew it, the number of women she gathered had inadvertently become an organization. She gave them a name: the Women in Comics Collective NYC (WinC). The number of women within the group had grown so much that Regine was forced to add the word “international” to their moniker. This was much bigger than New York City.

WinC is not just a collective of comic book artists, either. There are writers, graphic designers, filmmakers,

animators and more who have joined the group, proving that women in the comic book and multimedia industries are just as abundant as men. Regine believes that it’s not a lack of women in the industry that’s the problem, but visibility. That’s where WinC comes in. “We help women to promote themselves and generate more modes of income through branding,” she says. “By making them more visible and bringing more attention to their product, it helps to change the perception that we are a rarity.”

Regine is doing just that, in spite of the obstacles she has had to face. Alitha’s tale echoed some of the underlying currents of sexism and racism within the industry, some of which would threaten Regine with equal difficulty. “There have been more than a few obstacles, and we face them on a more regular basis than I care to admit,” Regine says. “I think having the existence of a well-organized Women in Comics organization can be seen as a threat for some people. Especially one that is comprised of mostly women of color.”

If there’s anything I’ve learned about Regine, however, it’s that wandering the lowlands of self-pity is not her thing. “We fill a great need in the industry that supersedes any challenges that we face in regard to sexism and racism,” she says. “It definitely can be frustrating but it equally will not stop my processes or progress.”

That’s who Regine is. That’s who she needs to be in order to build what she has in an industry that has constantly tried to show her, and other women, the door. “When you have a group full of creative, thoughtful, humble minds you can get anything accomplished,” she says. “The women in this organization have so many ideas that contribute to not only the betterment of the entire group, but to each person individually. If we can have that type of impact on each other imagine how we can affect a whole industry?”

A change is happening, and Regine is one of the many women at the forefront of that change. The notion that women do not exist in the comic book business is not only a fairytale in 2016, it is a flat out lie. They are here. They are visible. They are game-changers.

“The most important thing that I learned was to never take no for an answer,” Regine says. Her determination has been forged in adversity her entire career. “My ultimate goal for WinC is to grow our membership until it’s not ‘abnormal’ to see a woman working in the comic book industry.”

If you’re still in doubt, consider this your first opportunity to hop on board.

To learn more about WinC, a list of events, and applying for membership, check out their website: http://wincnyc.wix.com/womenincomicsnyc