Assassin’s Creed is a title well known to video game fans. The stealth action game and its subsequent sequels have helped define a generation of gaming since 2007. The action-packed series has seen its protagonists travel across the globe, from leaping across landscapes in Egypt, to sailing the high seas in the Caribbean. The overwhelming sense of adventure in these games is undeniable, and the epic tale that Alex Paknadel and Dan Watters attempt to craft in their story, Assassin’s Creed: Uprising seeks to take the same sense of excitement and drama from the games and embed it in a comic novel that spans the course of three large volumes and volume three is the finale of this tale.

For those unfamiliar with Assassin’s Creed lore, history as we know it is one long, covert battle being waged by two warring factions, the Assassin Brotherhood, and the Templar Order. The Templars are constantly hunting relics known as the Pieces of Eden which they believe will help bring stability to the world. Their constant foes, the Assassins, seek to thwart this group at every turn believe themselves the true guardians of humanity. By using a device known as the Animus, both groups have placed present-day people in the roles of their ancestors via technological crafted reality to obtain clues about Pieces of Eden and ways to subvert each other. 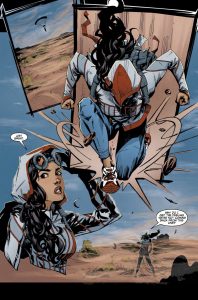 Assassin’s Creed: Uprising looks to take this idea in an interesting direction. The writers have introduced a third group into the fray. This faction fashions themselves as disciples of a god named Juno who they believe can end the conflict between Templars and Assassins and restore true peace to the world. One of their command, Jasdip, is a former assassin with a mean streak and holy determination to see the resurrection of Juno come to fruition. Standing in his way is a united front of Templars and Assassins under the leadership of Osto Berg and Charlotte de la Cruz respectively, and a young assassin who has a strange connection to the deity everyone is fighting against.

The story here is excellently crafted, with interesting relationship dynamics that define the characters individuality. The tension amongst Templars and Assassins is palpable, but the lingering factor of the futility of their fight overhangs everything. To avoid spoilers, I will not post the panel, but there is a moment where a character questions everything about the war that has been going on for centuries. He states, “…it’s all just a great game between proponents of two insanely reductive concepts of human progress.” Such a profound statement is where the novel shines and yet falters. We are asked as readers to root for the Assassins as we always have in this media. The Assassins are “good”, the Templars and every other group that stands in their way are “bad”. I had a hard time rooting for the Assassins here, let alone the Templars. The characters associated with each faction are well thought out and developed, but I would find myself not invested in their motivations or fates. 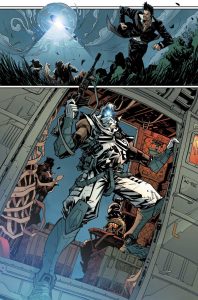 The artistry exhibited is professional and crisp. Action sequences are perfectly rendered here with large, dynamic panel frames. Fights are violent and satisfying where no punches are pulled either within a frame or by the artists themselves. Colors blend well with the mood given. Lighting is never an issue with night fight scenes expertly crafted. Even muzzle fire from machine guns takes a common gun battle and adds weight to the mood.

As a conclusion to a long series of books, Assassin’s Creed: Uprising will give fans of the series the exact medicine needed to scratch the itch that consumers of the video games love. However, I wonder whether new readers will be drawn to finish a novel that has issues with its own backstory. Ubisoft, the gaming publisher of Assassin’s Creed, has recently begun to move away from the Assassin/Templar storyline with the release of the last two games, Assassin’s Creed: Origins and Assassin’s Creed: Odyssey. It seems as they themselves see the problem with defining all of history as nothing more than a giant, endless battle between factions across time and reality, both real and virtual. For those who are interested in taking a look at this story, you can purchase the final volume of Assassin’s Creed: Uprising from retailers both online and offline available now. 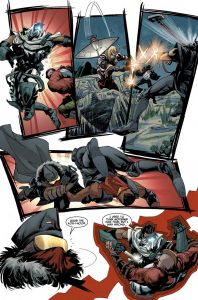