Beyond The Sky takes the tired and true trope of the alien abduction story and attempts to elevate it a bit further. And largely director Fulvio Sestito and his team succeed in doing this. Beyond The Sky tells the story of alien abduction skeptic/ documentary filmmaker Chris Norton (Ryan Carnes), who makes it his goal to disprove such accounts. His Ahab-esque goal of shedding a “truthful” light onto the occurrence of alien abductions is steeped in a bit of personal tragedy for the filmmaker, which the film delves into throughout the movie.

During a visit to a convention of believers and victims of such occurrences (think San Diego Comic Con for alien abductees and “true believers”), Norton comes across Emily Reed (Jordan Hinson). Through a variety of instances, their paths continue to cross, until Emily drops a bit of a bombshell on Chris: she is always abducted by aliens on her seventh birthday, with her 28th birthday only being a few days away.

Chris, along with his cameraman Brent (a hilarious Claude Duhamel), latches onto Emily’s plight, seeing an opportunity for a fresh take on the documentary they’re putting together. Chris also makes it his point to try to “teach” Emily that UFO abductions are a sham.

What stands out first and foremost for me, as mentioned before, is the hook of the “Emily’s Birthday” angle of the plot. To be honest, I would’ve been fine with the film only focusing on the plight that this woman finds herself put through, throughout her life. Hinson does a superb job of playing a woman who has seemingly accepted this terrifying event that happens to her. Like other abductees in the film, you get a sense that she’s suffering from a PTSD after effect when it comes to these abductions, and it’s pretty effective. 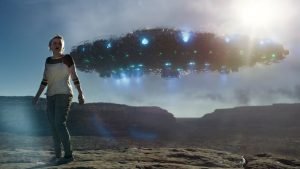 Jordan Hinson in Beyond The Sky.

Shooting the film in a documentary/ traditional shooting style works and doesn’t do too much to pull you out of the film. For example, when Chris and Brent attend the UFO convention in New Mexico, you can tell the movie was shot on location at an actual UFO convention. Such movies as Comic Book: The Movie, and even portions of Chasing Amy have utilized the same method of shooting within the midst of a real convention. Beyond The Sky does the same successfully providing an authenticity to the documentary feel of the film.

A special shout out needs to go out to cinematographer Chris Paul who captures the natural wonderland that is New Mexico. Whether it’s a car trip through the pitch-black backdrop of the New Mexico desert or stunning shots which capture the natural wonder of the setting, Paul does a great job of allowing the scenery to play as much of a character in the film as any of the actors.

My biggest hang-up about the film would be the length, and how things are wrapped up a bit too nicely for my taste by the end of the movie. You have this awesome hook about an abductee whose spent her life dealing with the trauma of being taken and possibly worse, that the story opens with. The way this all wraps up though is a little bit of a head scratcher for this reviewer and left me feeling that if the film had a bit more time under its belt, the movie wouldn’t end on such a rushed vibe.

Lastly, the relationship which builds between Emily and Chris feels a bit forced. This is a guy who throughout most of the film is a bit of a judgmental douche, though we find out a large part of that is due to his own personal trauma. Though we get to that understanding later in the movie, the relationship between the two protagonists in the film is a rocky one that doesn’t really have much time to build to where it ultimately leads.

All in all, if you’re looking for an alien abduction film which gives its viewers a fresh take on this arm of the science fiction genre, look no further. Beyond The Sky is a sci-fi film worth checking out.

Article Topics: aliens | Beyond The Sky