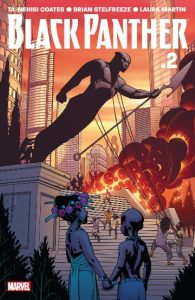 Coming right off the heels of a successful big screen debut in Captain America: Civil War where by most accounts his character is one of the brightest spots in movie full of them, and in the wake of a successful series launch, the second issue of Marvel’s new Black Panther series ratchets up the intrigue and keeps the momentum rolling along!

One thing I failed to mention explicitly last time around that I would be remiss to ignore this time around is the packaging of the book. While I can only go by my digital copy, it is assumed the paper comic is not much different if at all and features a nicely designed recap page to catch up on last month’s debut as well as a visually stunning credits page that could easily double as a pin up/poster sans words. These are the type of things that hardly seem worth mentioning but in this case it really helps to show the care and concern Marvel has taken to make this book something special, as both pages are true visual delights.

Coates’ story continues to impress as the drama builds- while certainly not lacking for action, it is very clear that this book is more political thriller than it is a “pure” superhero book. As one weaves the web of intrigue Coates is building up, T’Challa’s narrative reminiscing on his departed uncle and the lesson he taught regarding the weight of a crown upon one’s head becomes particularly impactful especially when you consider that we the reader are privy to things going on that the titular king is not. T’Challa has enough on his plate dealing with the issues he knows about, let alone the drama bubbling beneath the surface. Stelfreeze’s art continues to impress as do the colors and letters by Martin and Sabino respectively.

After a great debut I dare say the second issue raises the bar even higher. Like a good thriller things just get better as the story builds. 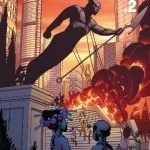 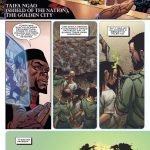 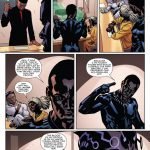 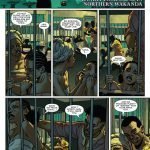