Note: The writer received an ARC copy from the author in exchange for an honest review.

When one imagines ancient Egypt, black people rarely come to mind. Despite historical evidence that ancient 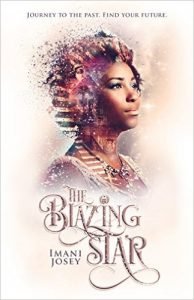 Portia’s story begins when she faints after holding an ancient Egyptian scarab beetle in class. After accidentally touching it again, she is transported to ancient Egypt with her twin sister Alex and a mysterious freshman named Selene. As Portia and the girls try to find a way back to the present, they become embroiled in a mystical and political battle for the scarab and all of Egypt.

One of the best things about this book is its main lead Portia. She is resourceful, brave, and caring. A prominent moment for Portia is when she uses newfound skills given by the scarab to protect Selene from bullies. Even though the scarab also made her physically ill, she decided to help Selene in order to do the right thing. Portia’s protectiveness is seen a few more times in the book and makes her a protagonist worth rooting for.

Besides Portia, Selene was a character with surprising qualities. At first, she seems like an enigmatic secondary character who happens to get mysterious visions. The reader gets bits and pieces of who she is as the book continues. When her true identity is fully revealed, she blossoms in a way that shows true loyalty to Portia. Hopefully, Selene will have a bigger a role in future books.

While Portia’s story is fascinating, other elements of the book made it hard to enjoy. One aspect that was both good and bad was the magic. On one hand, it was great to see Portia and Selene tap into their abilities against dark creatures and the book’s antagonist. On the other hand, Portia’s magical aptitude grows just enough so she can control her magic and defend herself. It was disappointing to not see Portia learn some advanced techniques.

In addition, there was not enough action in the book when it comes to magic and fighting. One chapter says that Portia is going to train to learn how to use her magic, but then the book skips ahead in time. It would’ve been nice to see how Portia trained and exactly how her magic works. Furthermore, Portia seemed to do more sneaking around in ancient Egypt than anything else. This slowed the pacing of the book down considerably and made it difficult to finish.

Besides the lack of magic and action, Portia’s sister Alex was hard to care about. While she is a genius, she doesn’t really use it much, even when the characters are in ancient Egypt. When she does display some knowledge, it doesn’t affect the story too much.It seemed like Alex was just in Egypt because she happened to grab Portia’s hand when she touched the scarab again. Alex was also unlikable because she kept complaining a lot and was inconsiderate about her twin’s feelings.

Overall, The Blazing Star has an interesting premise with great characters, but the book’s pacing made them fall a little flat. If you can handle a fantasy sci-fi book where the action is sparse, then give this book a try. This book is worth reading for the characters, but not for an action-packed adventure story.