Review: Of Cinder and Bone
0 Comments 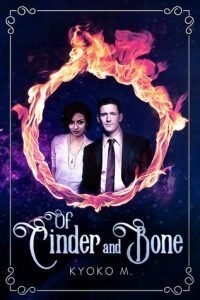 Most people associate the word dragons with magic, knights, and other elements of fantasy fiction. Of Cinder and Bone, the first book of Kyoko M’s newest series, takes dragons and puts them in a sci-fi setting that is reminiscent of “Jurassic Park”. Two MIT scientists named Dr. Kamala Anjali and Dr. Rhett “Jack” Jackson have managed to resurrect the first dragon since the 15th century. When the dragon is stolen, Kamala and Jack go to Tokyo to get it back and find themselves caught in a war between two different Yazuka clans that want to clone the dragon for their own means.

One of the best aspects of this book is the character development, especially that of its main leads. Doctor Kamala Anjali is an intelligent woman who is passionate and practical in her career and mostly fun in her personal life. She struggles to earn the approval of her father, but this displays her tenacity and faith in her career and her partner Jack. In fact, her stubbornness is the most admirable quality about her because not even Jack is allowed to be dismissive of her. One of the best scenes with Kamala is when she pins him down and threatens to dismember Jack for ordering her to stay put in America when their dragon is kidnapped.

In addition to her personality, Kamala is a great character because of how the author naturally applies Kamala’s identity as a South Indian woman to her everyday life. Kamala occasionally slips a Hindi word in her sentences when interacting with others and her parents’ upbringing plays a key role in how they treat Kamala. It is also shown how Kamala and Jack are perceived differently in the field of science despite working on the exact same project together. These little touches make Kamala’s character authentic and make you appreciate her overall character even more.

When it comes to the other lead character Jack, he is just as compelling. At first, he seems like the typical smart yet awkward white-guy scientist. At the start of the book, this is humorously played with as Kamala and her roommate Faye tease him about not wanting to go out and when Jack manages to fail at flirting with another girl by talking about science. Yet, there is much more to him than this.

As the book progresses, Jack is shown to be a pretty decent guy. He has some anger issues caused by unresolved daddy issues, but he is also considerate and protective of Kamala and anyone associated with her. In fact, his protectiveness is due to his unrequited love for Kamala. Not only does this make for an interesting subplot, but it is written so well that you can picture a romantic dramedy  going on in the midst of the action and adventure. Jack’s personal issues develop him as a character by allowing him to work through them and making him sympathetic.

In addition to Kamala and Rhett, there are also secondary characters that are enjoyable. Among them, the standout is the bodyguard Misaki Fujioka. Not only does she protect Kamala, Jack, and herself in a kick-butt manner, but she also has an interesting personal history that shows her as sexually passionate, romantically loving, and emotionally vulnerable rather than a one dimensional Asian stereotype.

Through these exciting characters, the plot is lively and well paced. As mentioned previously, putting dragons in a sci-fi setting might be unexpected for readers used to fantasy elements, but the author pulls it off impressively. There are shoot outs, chase scenes, and fight scenes that would look great on the big-screen and keep the story moving along at a good pace. They are balanced out with fun, poignant, and sexy character interactions with the characters that lighten things up and reveal more about them.

A final notable aspect of the book is the dialogue. The author’s habit of sprinkling pop culture references throughout her books is so enjoyable that you may smile or chuckle as you read the conversations between the characters. There is also some witty lines that stand out on their own as well. A personal favorite is when one secondary character states, “Profanity is the inevitable linguistic crutch of the inarticulate.” In response Kamala replies, “Fuck you, troglodyte.”

The only flaw with the book was how the thrilling concept of dragon hunting got sidelined. The book presents this as the reason dragons went extinct and is alluded to with the Yakuza, but other than that it wasn’t explored much. Given how the book is set up to have a sequel, hopefully the author will delve more into dragon hunting later on.

Overall, this book was an extremely pleasant read. The amazing characters and action-packed plot made this an impressive sci-fi adventure. If you enjoy any action-adventure sci-fi film, dragons, or Kyoko M’s previous work, then give this book a try.