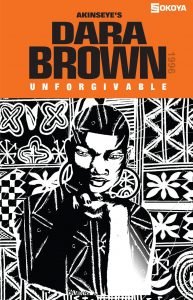 Dara Brown 1996: Unforgivable (created/ written drawn by Akinseye Brown) follows the story of a super powered community activist/ seamstress Dara Brown, who is attempting to find her way in a community which has seemingly shunned her. In a series of flashbacks we see Dara as a rising star in the Black Kingdom Movement in 1983 Philadelphia. She seems to be only second in popularity and appeal to Walter Benson, the leader of the movement, and is on an upward track to be one of the movement’s most effective and vocal leaders. As with all things in life, things don’t quite work out that way, and Brown finds herself scorned and vilified by the same organization after making a big mistake.

Did I mention the super powers? Brown seems to have a set of abilities including super strength, and super reflexes that she’s gained by way of a series of experiments she underwent at the hands of a shadowy organization.

The story starts with Dara on the run through a medical facility, where it seems that she’s either received her abilities willingly or has been forced to take them. As she runs through the facility, with her captor chillingly speaking to her over a loudspeaker, it makes for a thrilling action scene.

We get to page 3, panel 4 and everything fades to black as Dara is taken down by her captors, and we only see two pinpoints of light. On the next page, those lights become the headlights of a train, which acts as the connecting point between the earlier scene with her attempting to escape, and now a scene sometime before (or later?) where she’s in a diner. Transitions like this work well for Dara’s story.

Dara is the most interesting thing in this story for me. Her “origin story” is an original one, mixing a sci-fi adventure with a tale of a disgraced community activist trying to fight the good fight, while seeking the acceptance of a community which has shunned her. I feel that there’s only so long that she’s going to keep being able to keep taking folks dishing it out on her (check pages 9-14 for a good example of this), and I’m ready to see her tale of redemption finally come to a head, in addition to some more acts of super abilities being used.

The amount of self restraint that Dara has during such a scene with her customer is exemplary. Especially when in the same scene we see her use her abilities to kill a fly in a really effective way with a thimble.

The art works well, with the black and white pencils/ inks providing a straightforward look into the larger tale being provided here.  The aforementioned scene with the thimble/ fly kill on page 12, and just the conversation as a whole between Dara and her customer, is a really good example of this.

The only thing that didn’t work as well for me was the small bit of action when we’re introduced to Dara in present day. We see her walking to her shop, but before this there are two individuals who seem to be in the middle of an upcoming shoot out. Shots are fired, and Dara leaps into the fray to save (or capture) the two individuals shooting at each other by tossing  a car into the mix. The way it reads is that the car was possibly going to find itself in the crossfire, Dara’s choice is to toss it away where it explodes, and she either captures or saves the two shooters.

I was a little confused as to what was happening, and just hope that future acts of super heroics can come through a little bit more clearer.

The book is definitely worth checking out, as it provides an original take on a tale of redemption, activism, with a sci-fi/ super heroic backdrop.

Head to http://www.sokoyaprod.com/ for more information.