Review: Don’t Play With The Aliens Book I
0 Comments

When you were a child, chances are your parents told you, “Don’t play with those kids.” While said with good 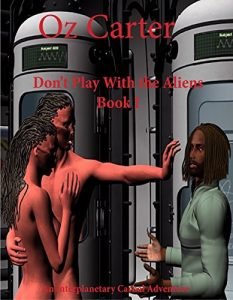 intentions to protect, this can also be the result of an underlying sense of fear and discrimination. In Part I of Oz Carter’s ebook serial, Don’t Play With The Aliens Book I, a trader of alien artifacts has his view of aliens tested when he discovers an extinct civilization is not extinct.

One of the best things about this story is its black male protagonist Arlo Tuck. As a selfish, entitled, and greedy guy driven by sex and money, he isn’t especially likable. As the story develops, Arlo is forced to change and consider an alien species that isn’t like him. While he doesn’t have a complete personality change, Arlo Tuck gradually comes to display the compassion and concern for others that everyone needs to have in their life.

Arlo Tuck seems to represent the sense of entitlement that can be present in everyone, particularly black men. At one point in the story, Arlo says that the alien female he encounters should satisfy his lust because it is her gentalia that is causing him to be sexually aroused. This is not unlike the real-life expectation that some black men have for black women, including the ridiculous notion that black women owe black men something simply by existing. Through Arlo, the story shows that no matter how entitled we may feel toward those considered Other, we need Others to survive.

If Arlo Tuck is an unlikeable character with hidden depth, then the aliens are the more fascinating ones. There are three important alien species in this story, but the most prominent of them is the Khyrondratta. Their unintentionally sheltered life in stasis advanced technology, and their complex symbiotic bonds make them compelling characters. If the tale had been written from the point of view of the Khyrondratta instead of Arlo Tuck, the story would’ve been harder to put down.

Not only do the Khyrondratta move Arlo Tuck’s story forward, but they also represent a darker side to marginalized identities. As the story reached its climax, a quote from Langston Hughes comes to mind. “Negroes, sweet, docile, meek, and kind; beware the day they change their mind.” Once the Khydrondratta come to face painful truths, so does the reader. This painful truth is that some civilizations are willing to do anything to survive without being ruled, especially when physically and mentally torn apart from one another.