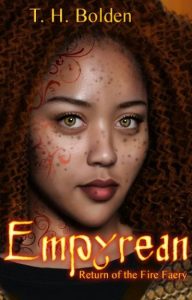 Growing up, I didn’t see any fairies of color with curly hair. I got used to associating fairies with the blonde-haired blue-eyed Tinker Bell because she eventually had her own storyline and major role. Meanwhile, any fairies of color I saw felt more like side-kicks than actual characters and always had skinny bodies and straight hair. With T.H. Bolden’s Empyrean: Return of The Fire Faery you get a plump black female protagonist with naturally red curly hair, multiple magical creatures of color with major roles, and a magical adventure.

Empyrean stars a teen-age girl named Imogen Ferris who is an orphan, foster child, and high school social outcast.  After the death of a classmate sends her reeling, she goes to her parents’ sacred sanctuary for comfort and is transported to a world of magical creatures called Empyrean. Soon, she is told she is the key to restoring balance between light and darkness, and must get stronger in body and soul if she ever wants to succeed in her given quest.

One of the best things about this book is Imogen. At first glance, she seems to be just a troubled misfit but there is so much more to her than that. Imogen can fight hand-to-hand, so she isn’t a defenseless maiden when she first enters Empyrean. As the book progresses, her skills grow as she learns to fight with a sword and shield. Imogen also grows by sticking to her morals, being considerate of others, and learning to love herself. In fact, she literally discovers her own power the moment she declares she is strong enough, and that is really empowering. As a person, she is also feisty and quirky, taking no crap, demanding respect, and making amusing pop culture references throughout the book.

Besides Imogen, the magical creatures are entertaining. There are fairies, unicorns, giants, and they all make Imogen’s adventure exciting with action and adventure. Out of all of these creatures, the unicorns and fairies are the most interesting. When Imogen first enters Empyrean, she meets a black unicorn named Daegean. Since Daegean is an outcast like Imogen, they develop a sweet friendship that’s so tight that they can communicate with their thoughts.

Meanwhile, the fairies have cool elemental powers that coincide with body markings of different colors. One fairy, Raffe, is a water fairy with a blue marking that becomes Imogen’s love interest. Two other fairies that accompany Imogen are a Latina air fairy named Saffe and a Korean earth fairy named Wakeley. They both are shown to be good friends of our protagonist and great fighters. There is also an Indian fairy that serves as the Oracle for the fairy King and Queen, who also provides guidance to Imogen, while giving the story a third person point of view for the reader.

One of the flaws in the book is how the connection between Empyrean and the real world was established. It would’ve been better if there were more concrete instances of the darkness in Empyrean affecting the real world and vice versa, especially by the end of the book. Not only would it have raised the stakes for Imogen more, but it also would’ve enhanced the world building.

Another flaw in the book is how being straight seemed to be established as a default, particularly when it comes to how fairies are involved in romantic relationships. The fairies experience something called a “soul surge” when they touch the person they are meant to be with. However, it is implied that this only occurs between male and female fairies.

Another way straightness seems to be set up as the default is through problematic dialogue. For instance, one sentence goes, “We were so worried because Raffe didn’t seem to be interested in the fairy girls.” If the author was trying to avoid associating fairies characters with offensive slurs or stereotypes, then that is understandable. However, readers who aren’t straight might feel uncomfortable and left out.

Despite its flaws, this book is a good young adult fantasy with magic, adventure, and a complex female protagonist. If you are tired of the same looking fairies and magical creatures in fantasy, then give this book a try.