Review: From Here To Timbuktu
0 Comments

When you take alternate history, steampunk, and put it together with the historical perspective of Africans and 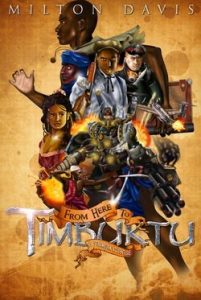 African Americans, you have the genre known as steamfunk. From Here To Timbuktu by Milton J. Davis is one of a handful of books that embody this genre. Its plot centers on three individuals looking to get their hands on a valuable book: a Freedonian bounty hunter for hire named Zeke Culpepper, a Malian warrior named Famara Keita, and a Prussian officer in Germany named Dolph.

One of the best aspects of this book is the action-adventure woven throughout the plot. There is excellent pacing that smoothly transitions from dialog to action and well-written fight scenes that are exciting and make you feel like you’re watching a movie rather than reading a book.

Another facet of the the book that is mostly well-done is the characters. Zeke Culpepper is a cowboy-like guy who is very skilled with guns and is down-to-earth enough to maintain a regular life as well as a life as a bounty hunter. Famara Keita is reminiscent of James Bond, without the womanizing. He can go undercover, fight well with guns and daggers, and is willing to do whatever it takes to fulfill his mission and be honorable to his homeland.

In addition to the male characters, there are female characters who are just as equally skilled and almost as well written as their male counterparts. Annette Bijoux is a retired singer turned Freedonian spy who can shoot and fight. Menna is an assassin and brother to Famara Keita who is ambitious as she is deadly. While there aren’t too many chapters centering on Menna, her character development in the book suggests she may play a bigger role in future books.

A final positive aspect of the book is the steampunk technology, particularly the automatons. There were scenes featuring giant automatons firing machine guns and the like and they were very thrilling. Another facet of the technology that was intriguing were the automaton cats. Like Menna, their potential for further development is high and hopefully they will make another appearance in future books.

The only flaws of the book are a few typos, grammatical errors, and the writing for Menna. While the former didn’t take away from the overall enjoyment of the book, the latter was somewhat disappointing. Even though Menna is an impressive character, she wasn’t given much to do and the chapters focusing on her do not add much to the story other than some great action-scenes. In addition, her final appearance in the book felt a bit too rushed.

Despite these critiques, From Here To Timbuktu is a riveting read that will keep you turning the page. Freedonia, Timbuktu, and all the places in between will take the reader on a smart, amazing adventure. If you’ve ever wanted to see characters of color at the forefront of a steampunk book, then this is worth the read.