In Afrofuturism, the android often symbolizes the struggles of the black working class and how their intelligence, talent, and labor is used to 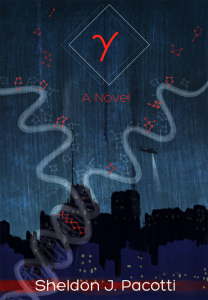 benefit those with more privilege than them. Sheldon J. Pacotti’s book Gamma takes a similar approach by using beings known as transgenics, a group of human beings embedded with machine intelligence.

In the year 2037, Shannon Jones has been imprisoned for a decade for his inhumane experiments on transgenic subjects. Ironically, he is a transgenic being whose work led to a biotech revolution for his creator Mr. White. The experiments also resulted in a lot of unstable subjects and unfinished research that are now left in the hands of ignorant, aging scientists. After escaping from prison, Shannon Jones hopes to help those unstable subjects by gaining access to public domain scientific research known The Corpus.

One of the strongest aspects of Gamma is the protagonist Shannon Jones. While the book’s  synopsis makes him appear heroic, things aren’t so black and white. Since Jones is partly responsible for betraying the trust of the subjects used in the experiments, the reader can’t cheer him on one hundred percent of the time. However, the fact that Jones’ unstable mind has put him one step away from literally fighting back against racist and classist institutions makes him a sympathetic character.

Besides Shannon Jones, the world he lives in is built on an incredible and terrifying scale. Starting with the transgenics, we have a group of people living in a state of double-conscious due to the fact that their minds contain instability and genius, but their bodies contain physical characteristics that make them marked by society. On top of that, we have medical and government groups that affect how they live their daily lives, forcing them to hide their intelligence in order to not get too ahead and yet be respectable enough in order to not be considered savage.

In addition to Shannon Jones and the world he lives in, there are also transgenics that serve as secondary characters that Jones encounters who end up aiding him in his goals. There is a male Muslim cop who risks his life to protect society, a criminal turned security guard for a prison, and a young woman who attends community college to escape the streets and an abusive home.

Out of all of these characters, the male Muslim cop and the security guard have the best characterization. With the male Muslim cop Jalil, we have someone who is caught between being hated for his religion and being hated for being a cop. After being thrust into the spotlight for a messy case of police brutality, Jalil has to decide whether his job is more important than himself.

Meanwhile, the criminal turned security guard is a young man who just wants a quick way out of his circumstances, but soon finds that his own personal background causes conflict between him and the prison. Like Jalil, he must choose to rage against the machine that brought him to that point or risk losing his life.

While the characterization of Shannon Jones and other male characters are well done, the same cannot be said of Luz, the community college student. More often than not, she comes across as way too stereotypical in terms of her personal background as a brainy girl running away from the hood. She is very self-aware, but since the narrative focuses more on the other characters, there isn’t enough time to get inside her mind and see what makes her tick.

Overall, Gamma is a raw, dark, and intricate thriller that demonstrates the fear, desperation, and hope. It’s well written in terms of its male lead and certain secondary characters, but could stand to improve its characterization of female characters. Nonetheless, the book is a good addition to the sci-fi genre and one that is a bold voice for marginalized communities.