Review-The Hood : A Change From Within
0 Comments

The Hood is the creation of Stephen Townsend which has been brought to life in his vigilante series through a successful Kickstarter campaign. He and his team executed this graphic novel with excellent precision. The artwork is wonderfully and professionally done, while the images almost pop up off the pages. I must admit that I am not an artistic expert but as a comic book fan I couldn’t find a flaw. The artwork provides a wonderful support for the writing and story provided here. Although I read this as leisure reading, I am overjoyed when I am educated by a story and shown methods of thinking outside the box.  Stephen has a way of bringing to the forefront the issues and tragedies that plague the black communities and inner cities. Especially with the “Black Lives Matter” and the National Anthem controversy unfolding before us within the media practically every day. This makes a reader critically think of the choices that face our hero – “The Hood”.

The story as a whole is very solid and flows naturally. I like the way that despite the social issues which are addressed, there is room for some personal and internal introspection for the reader. I wish that the message the current generation has taken for granted of the struggle of those that have come before them was expanded on. It’s a concept that has been repeated over and over by many but never truly addressed. It left me feeling that it was just glossed over but it was a point that needed to be made. 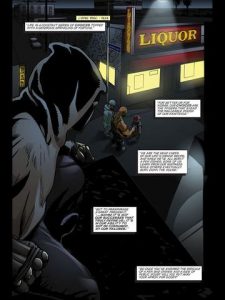 A page from The Hood: A Change from Within

Despite bringing up a difficult subject matter, the story provides hope for a difficult situation. Not just hope for a hero, but hope for making the correct choices, no matter how difficult the situation may seem. This message is delivered to the reader in a manner that is not overwhelming or overpowering and provides confidence in ones decisions to make a change in their life.  Our superhero has no super human strength given by any mutation or horrible accident. He becomes the hero due to his choices and decisions as well as circumstances, just like everyday heroes in everyday situations.

We are taken through the chain of events that has given birth to Anton Peters’ alter-ego “The Hood”. From one too many losses that has been a result of senseless violence, Anton is faced with some serious choices to make. The choice of falling deeper into his grief and leaving everything up to a God that he was quickly losing faith in, the choice of joining a rival gang to assert retribution, or the choice of becoming the change that he wants to see in the world. He quickly discovers that every choice made has consequences, whether they be positive or negative. We find that his actions will bring some much needed supportive people, as well as some not so supportive people. Either way the first thing on the menu for Anton is to make the streets of Abrams Alley safe for its residents. As simple as that sounds it doesn’t come off as easy. Change is not easily accepted by those sitting on the top of the food chain, which The Hood quickly discovers. Can he become the change and hope that he wants or will he make the situation worst? 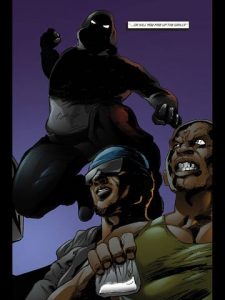 A page from The Hood: A Change from Within

Stephen Townsend has done a wonderful job of addressing social issues via a wonderful manner of artistry that gets the point across. Townsend adds a unique viewpoint and concept while creating a wonderful story. The writer brings the reader a thought process that is much needed within our community, and does this on both a personal and social level. Overall this is a graphic novel that will be added to my bookshelf and I’ll guarantee yours as well.