Comic book creators (including myself) take note: This is how you start a series.

To put it simply, I’m hooked, and I want more.

That’s how I felt immediately after finishing the first two issues in what’s sure to become a breakout hit of the year, and I’m calling 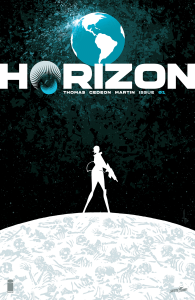 it now (because I also kind of selfishly want this): a Netflix/ Amazon Prime series, either animated or live action.

Taking it further, that’s how hyped I am after reading the Skybound published Horizon. Created by writer Brandon Thomas (The Many Adventures of Miranda Mercury, Voltron) and artist Juan Gedeon (Ghost Racers, Strayer), the story tell’s the tale of an alien invasion, but its not quite what you’d expect.

In this case, the alien’s have infiltrated our world on a covert ops mission to prevent us from leaving and invading their world of Planet Valius.

By the end of the 2nd issue, I’d be inclined to root for the opposing team, because the home team is majorly f&^%$#!g some ‘ish up here on Earth.  Though the exact year isn’t provided, you get a sense that the future Earth that’s being shown in these two introductory issues isn’t too far off the mark of where things are possibly headed even now in our present world. Overpopulation has effected major metropolises like Chicago (love the shout out to my hometown even though Millenium Park now looks like crap in the book), fresh water costs $5 a gallon, and war unfortunately seems to be the answer to every damn thing.

I’m getting sidetracked. I tend to do that when I’m excited about something.

Like the Mighty Busta Rhymes said, “Heel up, wheel up, bring it back, come, rewind”. 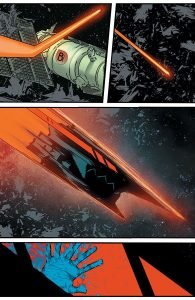 blockbuster. Thomas’ and Gedeons’ pacing on these few pages is great as we get a sense of how epic this story is going to possibly be, as Malen infiltrates our world. From this point, there’s a bit of genre mashing going on of espionage thriller and good ole’ fashioned science fiction. As a fan of such properties as Queen & Country and Star Trek, this for me worked on a variety of levels.

Malen (in between a little bit of flashbacks and slanted/ feet in the air pushups) seeks to re-connect with her team members (Madame Coza, Agent Davix, and Agent Finn), while we get a chance to see the sorry state of affairs that Earth has fallen into with her trip across the Midwest, with a little bit of social commentary mixed in. Seeing Malen working her clandestine magic in various situations with the aide of her alien technology is fun to watch, and Gedeon is working an awesome type of magic here with his art.

In issue 2 the action ramps up as Malen and Coza rendevous with Davix, and soon are on a mission to find missing group member Finn. I’m going to stop the summary here because I want you to buy the first issue which drops today, and issue 2 which will be released on August 17th.

To begin with, I’ve been a big fan of Thomas’ work ever since I had a chance to check out his co-creator owned series The Many Adventures of Miranda Mercury. With his work on Voltron, and now Horizon, he has become one of  my go to writers with comic book sci-fi. The world building that’s on display here keeps you invested in the story that’s being laid out, as you begin to see feel how crucial this mission is. And within the first couple of issues I’m finding myself enjoying this special ops team, as I found myself (as mentioned before) rooting for the “invading” force.

And can I say, I’m ready to see this group put in some work, as they take on a sort of monumental Mission Impossible-esque task to save their home planet of Valius. 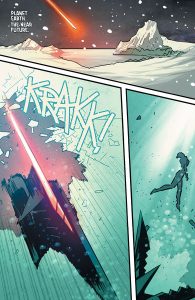 This is the first time that I’m seeing Gedeon’s work and I’m glad that this is my introduction. For the design of this Earth, and the story as a whole it feels, at least for me, like a hybrid between Minority Report, Blade Runner and Children of Men. You get traces of an old post apocalyptic world, with hints of a far flung future strewn throughout. There’s a minimalist/ retro type of feel to his work and it works superbly. One example of this is Malen’s design, which is a solid one, especially when she “gears” up to handle business.

The opening spaceship crash in issue 1, and the battle that takes place in issue 2 is a great example of Thomas and Gedeon working in tandem to create some solid storytelling. Frank Martin’s work on colors is a really nice added touch as he does a great job of capturing the look and feel of the far flung planet of Planet Valius, to a corpse ridden cemetery somewhere in Kentucky. Russ Wooten with the letters also does some great work here, especially in the scene where Malen is having some “translator” issues. A personal favorite moment from the lettering perspective was the delineation between the Native Valian and Earth English language key early on in the first issue.

And Jason Howard’s covers? I need to get these things framed.

So for a huge science fiction fan, whose Netflix and bookshelves are stocked with endless amounts of speculative fiction, Horizon is a welcome addition to the fold.

Do yourself a favor and ‘cop the first issue today at your local comic book store, or through digital outlets like Comixology. 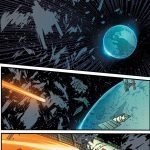 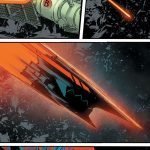 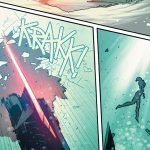 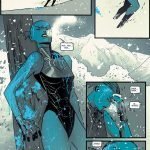 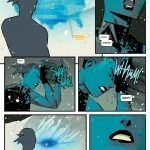 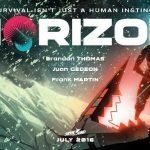