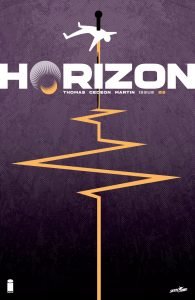 and her crew set out to rescue one of their own. While the first two issues of this series did a great job of doing a bit of introduction and world building, with issue 3, Zhia and her crew’s mission begins with a race to save a captured team member.

As I mentioned in my first review of this series, this team of creators is doing a really good job of making me more of a supporter of the invading alien force. Nowhere is this made more clearer for me than through the torture/ interrogation sequence that we get where Finn is being put through the ringer.

I won’t spoil what his ultimate fate is but, things aren’t looking so good for Finn. We’re even given a nice flashback featuring Zhia and Finn, showing a little more of life back on their homeworld. These scenes do a good job of balancing out the harsh scenes of Finn’s torture, and the sequence where Zhia and her crew come in guns a blazing. Gedeon’s work on this issue is solid, as he balances all of these changes in mood perfectly.

This leads me to where I felt this issue shone in particular.

One of the things that I like about good storytelling is how an antagonist is introduced. He or she is going to be the primary foil to the exploits of the protagonist(s), putting him/ her/ or them through the ringer on a variety of levels. But if this person/ entity/ creature is written well enough then you might find yourself enjoying seeing this individual just be so bad, while also wanting someone to knock him or her on their butt’s.

This is the case of Horizon #3, with the introduction of Lincoln. This dude can fight. He’s smart as heck. Cocky, self assured, and I’m loving it. In his red Nike high tops, and blazer, we now have the introduction of an antagonist that you’re going to love to hate. Mix Jules from Pulp Fiction with The Operative from Serenity, and you’ve got Lincoln in all of his awesome baddie glory.

I’ll also go on record as saying, I love that there’s a strong black antagonist pulling the strings in this whole epic sci-fi story, and he’s not a dude to be messed with.

I’m just ready for the issue where he and Malen throw down. 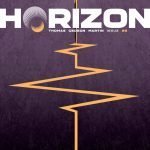 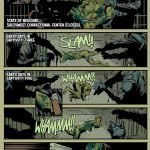 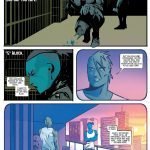 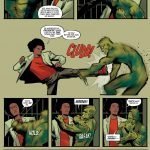