Picking up right where issue #1 left off, issue #2 of Michael Watson’s superhero tour de force finds Hotshot in the 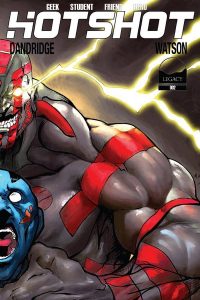 difficult position of having to worry about saving the woman he loves, but also the woman who just broke his heart (spoiler- it’s the same woman in both instances). This all has to be done while dealing with the continued menace of a deranged super powered villain.

There is a nice little moment during a brief pause in the fight where Hotshot is able to spirit his alter-ego’s ex away to safety, but in doing so makes a bit of a slip up that will be crucial later on. It’s the kind of nice little tidbit that makes the story realistic and grounded a bit, in an otherwise fantastical tale. After eventually dispatching with the big bad, that “little tidbit” comes back around to set up one heck of a cliffhanger and lead in to the next issue.

Watson’s pencils on this issue remain just as lively and full of energy with his kinetic style on full display in the action packed battle between the hero and the big bad. The change with inkers from the first issue to this second issue doesn’t appear to cause any disruption. The lettering is serviceable at best and could certainly stand improvement. One particular issue worth noting is the inconsistency in Hotshot’s thought caption styling from the first issue to this one.

That and some issues with bad letter spacing within balloons and boxes mar what is otherwise a very fine book. Dandridge makes up for the lettering with a very good script that really captures the ups and downs that must come with being a young hero. As touched on earlier, the bits that lead to the big moment at the end of the issue are particularly well done, and the relationship between the hero and his girl get explored in more depth.

All in all Hotshot #2 builds on the momentum that started with the first issue and serves as a perfect lead into the third act where things really start to come together. But that is for another day.