The African folktale of Anansi the spider is one of the most well known stories in the world. With Webway Comics’ 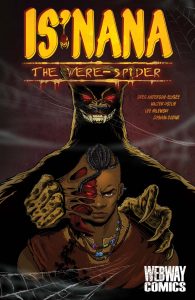 Is’nana The Were-spider, Anansi is given new life through the superhero genre. Telling the story of Anansi’s son Is’nana, the first volume blends African folklore with modern storytelling for a fresh and exciting adventure.

One of the best aspects of the comic is Is’nana himself. Those who assume that Is’nana is a Spider-Man copycat will be proven wrong once they read this comic. While he does share some similarities with the American web-slinging hero, he has an identity that is unique and inspired by the original African folktale of Anansi.

As Anansi’s son, Is’nana powers consists of the ability to walk on walls and buildings as well as firing webs and poisonous venom. Yet, the most notable feature about his abilities is that he can transform into a spider-form in order to tap more fully into his powers and connect with his spider brothers and sisters.

While Is’nana’s spider abilities are impressive, Is’nana the young man is also worth caring for. Following the tradition of teen superheroes, he comes of age by becoming a hero that preserves his father’s legacy while carving out his own. As he learns to use his abilities to help mankind, he develops a moral compass that tries to help people without causing them too much harm.

Besides the book’s main protagonist, there are other characters that are well developed. One of them is Anansi, who manages to be just as interesting as his folklore counterpart. In the book, he is mostly seen sitting on Is’nana’s shoulder as a spider and giving out guidance as a father. While he also helps out in fights, he still lets Is’nana fight his own battles until he is overcome.  Although Anansi might be better if he also had a spider-human form like his son, his interactions with Is’nana are still fun to watch.

In addition to Anansi, Osebo the leopard makes a great antagonist for the first half of the book. Becoming a more terrifying figure than his folklore counterpart, he is portrayed as a kind of parasite that possesses humans and feeds off their souls and bodies until he is done. While the way he is drawn might scare younger children, having his battle with Is’nana and Anansi read to them makes for good entertainment.

Together, all the characters in the book tell an engaging story filled with action and adventure. After the events with Osebo comes a prologue that shows what happens when Is’nana first starts using his powers to rescue his father Anansi. Despite ending on a cliffhanger, it is so well written that it makes you want to read the next book in the comic series.

When it comes to the artwork, most of it gives off horror vibes. This especially applies to the way Is’nana, Anansi, and Osebo are drawn, with detailed closeups of jarring spider and leopard forms. However, there is also nice scenery that is easier on the eyes, especially when it comes to the setting known as The Mother Kingdom. The artwork there has warm colors and tamely drawn creatures that are pleasant to look at.

All in all, Is’nana The Were-spider is a thrilling comic book that is great for superhero, horror, and folklore readers. By fusing African folklore with the superhero genre, the comic tells a new story that will pique the interest of many. Readers who need a break from American settings and superheroes should give this book a chance. 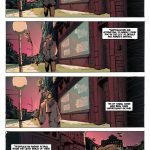 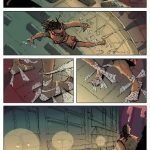 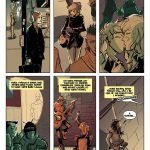