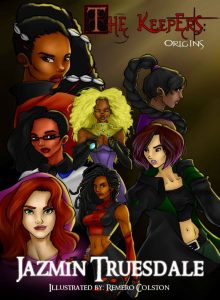 Although we’ve had black female characters like Storm, Vixen, and Misty Knight, we’ve had so few black female comic creators in mainstream comics. It took Marvel Comics until last year to hire black women and DC Comics hasn’t had any in ages. Luckily, black women in comics have been self-publishing their work and even making their own independent companies. One such creator is Jazmin Truesdale, who founded Aza Comics and created a multi-cultural female superhero team. Through the book The Keepers: Origins, we learn about the Aza Universe and the circumstances that lead to the women coming together.

As it turns out, the circumstances involve a power-hungry villain named Kiran, who is part of a group of warriors called The Askari. Kiran is scouring the Aza Universe for five female children that will become the new Askari and a threat to his own goals. In order to locate the unborn children, he has imprisoned and blackmailed a female seer named Nari. Meanwhile, a princess named Thema discovers she is pregnant with one of the new Askari and must leave her home realm to protect her child. Through Thema and Kiran, fate slowly brings the five female Askari children together as a devious plan is put into motion. 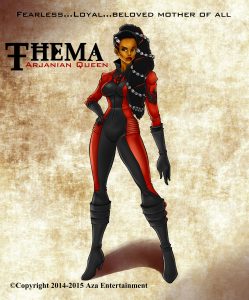 Out of the many characters we meet in this book, Thema is one of the ones that stands out most. She is a Black woman who is as regal as her position requires, but also resourceful and deadly. She makes a good first impression on the reader by making Kiran think she had a miscarriage and buying herself time to leave her home planet of Arjana. Later on in the book, she demonstrates her kick-butt action hero skills by fighting a criminal hijacker one-on-one and then leaping out of a crashing transport to safety. Although most of the book is told only with words, this particular scene is shown as a short comic strip that is fun to read.

Another great female character is Nari the seer. She is witty and clever enough to keep Kiran in the dark about the five girls for a while. Although she receives help from Kiran’s son Jasim, he never treats her as a damsel in distress. He is sympathetic about her situation, but respects her enough to let her stall Kiran by herself unless she asks for help. Given her circumstances, Nari proves to have a resilient spirit in spite of the threat of her own death and that of her loved ones.

Two final female characters that are memorable are Mai and her daughter Amaya. They are Asian characters that escape from the clutches of an abusive husband and father named Hwen, only to discover more trouble when they join Thema. Mei is a smart, brave, loving mother to Amaya, while Amaya is as precocious as any four year old. In fact, it is her innocence and wide-eyed wonder with the world that gives her mother strength to keep moving forward. However, Amaya is also sharp due to her speed powers and her protectiveness toward her mother. Together, their mother-daughter relationship is one of the most poignant relationships in the book.

No matter which female character you learn about, a factor that makes them interesting is how they relate to the world today. There are some chapters of the book that feature the United States as a setting, which provides the opportunity for a few of the characters to comment on the Charleston massacre, colorism, and other issues. It’s never forced, but presents itself as naturally as two people discussing the news. One of the characters doing commentary is one of the women who will become a hero, making the reader consider whether being a hero in today’s world is worth it or not.

As much as I loved the female characters and their multi-racial diversity, they could be more inclusive. Based on the drawings of the 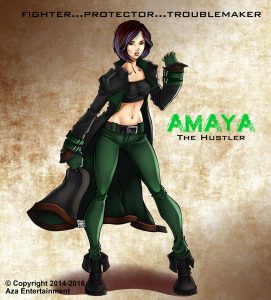 characters, all of them seem light-skinned, able-bodied, and similar in body type. Beyond racial diversity, there is a slight mention of LGBTQ characters that are friends of two of the characters. These women are a big step forward for gender and racial representation, but there is room for more intersectionality.

Although there are many memorable female characters in the book, their male antagonist Kiran is less so. Kiran is dangerously clever, but his thirst for the ultimate power came off as hollow. There could’ve been more backstory for Kiran that told what is motivating him to get the ultimate power. Mei’s abusive husband Hwen had more backstory than Kiran did, but Hwen wasn’t the main antagonist. Kiran needed more depth as a character in order to be taken seriously as a villain, and hopefully future books will improve that.

Overall, the The Keepers: Origins is a thrilling introduction to the Aza Universe and a female superhero team. There is plenty of action, adventure, and girl power to keep the reader turning the page. Even though the female characters could go beyond racial diversity in terms of representation, the heroines of the Aza universe are powerful characters worth getting to know. 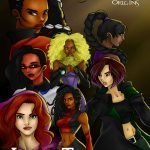 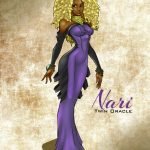 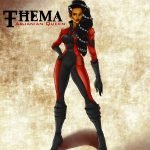 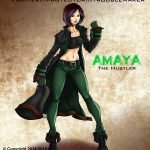