Unless you are a fan of both speculative fiction and poetry, speculative poetry may be unfamiliar territory. To write 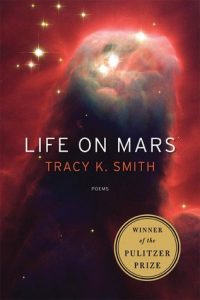 Starting with the very first poem, “The Weather In Space”, Smith sets a tone that is questioning and sentimental as she discusses the moods that occur in outer space and the emotional space of humans. This is especially evident in the following lines: “When our lives slow/And we hold all that we love, it sprawls/In our laps like a gangly doll/When the storm/kicks up and nothing is ours/we go chasing after all we are certain to lose/so alive”.

The poem seems to suggest that outer space is anything outside our normal daily life and that this outer space can invade us and cause us to lose something precious. For black people through the entire diaspora, outer space has given us countless centuries of oppression, but we still strive to be more. Smith does exactly this in the poem “Sci-fi” as she ponders the future. Notable lines bring to mind the sense of peace that black people yearn for. “Weightless, unhinged/eons from even from our own moon/we’ll drift in the haze of space/which will be once/and for all/scrutable and safe.”

In order to cope with oppression, black people have historically used spirituality and religion. Although outer space is depicted as a threat, stars, moons, and planets are revered in “My God, It’s Full of Stars” because they give hope of a better place or a cosmic being watching over us. This is demonstrated through stanzas with beautiful imagery and references to the film, 2001: A Space Odyssey and the poet’s father, who worked on the Hubble Telescope.

Throughout part 1 of the book, Smith continues to consider the nature of outer space, the stars, and the future of humanity. “The Museum of Obsolescence” collects things that may not have meaning in the coming years and imagines them preserved. “It & Co” considers the mysterious “It”, that we are part of and look for. “Don’t You Wonder Sometimes?” imagines the stars as the “Starman” himself, David Bowie. These poems are so thoughtful that they make the reader want to think too.

Meanwhile, part 2 of the book is much more somber. In two poems entitled “The Speed of Belief” and “It’s Not” the poet grieves for her father. The former poem is especially poignant because it seems to infer that her father has gone to a perfect heaven that is also a part of the universe. In grief, the poet thinks about her daily life without him, what his afterlife is like, and whether he is truly gone. In these poems, death seems to be connected to the outer space mentioned in “The Weather In Outer Space” due to how it invades the living.

If outer space has “weather” and death is part of bad weather, then part three of the book sums up this bad weather as dark matter. In science, dark matter is considered an unidentifiable part of the universe we can see. In the poem “Life On The Mars”, Smith takes the concept further by asking, “What if dark matter is like the space between people/when what holds them together isn’t exactly love?”

If dark matter is the space between people and what holds us together isn’t love, then it is reasonable to consider dark matter as bad weather. In the case of Smith’s poetry, dark matter is bad weather and bad weather is death, fear, and hatred. The rest of “Life On Mars” describes snippets of acts of hatred; section seven refers to prisoner abuse by the US military in Iraq. Other poems are similar, dealing with fear of the outside world, the killing of those considered threats, and homicide.

Besides “Life On Mars”, the most prominent poem is “They May Love All He Has Chosen And Hate All He Has Rejected”. Inspired by several shootings that took place in May and June 2009, the poem is told in four sections. While the first three sections explore how hatred can spread among people, the last section has the victims of the shootings sending letters to their attackers from America’s landmarks. Together, this poem and “Life On Mars” make a powerful statement about hatred and death. Depending on where you are on earth, these acts can seem as far away as outer space until it actually invades your own life.

For the final part of the book, the poems relate the mysteries of the universe to everyday life. In “The Universe As Primal Scream”, the universe is likened to newborn babies heard crying in the next room. Physical and emotional intimacy is portrayed as a part of that mystery in poems like “Everything That Ever Was”, “Willed in Autumn”, and “Sacrament”. The book’s concluding poem, “Us & Co.” reaffirms our ties with the universe by reflecting on our mortality and our need to belong.

Overall, Tracy K. Smith’s Life On Mars demonstrates how life may seem alien, as you may feel like an alien or may treat others like one. For better or worse, aliens turn toward each other and the stars in order to cope with their lives. If any part of life, death, and the universe feels strange, then Tracy K. Smith’s book shows it clearly in its beautiful and terrible glory.