For the month of April, BlackSci-Fi.com will celebrate Kids, by featuring creators and works who/which are contributing to providing quality, fun, and educational works of art for children and teens.  Our goal is to highlight the continued and past works of these talented individuals as they add to the ever growing intersection of kids/ teens and sci-fi, fantasy, and real world sciences.

When you hear the word magical girl, you usually think of middle school aged girls, dramatic transformation sequences, and starry-eyed views of love and friendship. Mahou Josei Chimaka takes all this and either satirizes it or dumps it on its head. 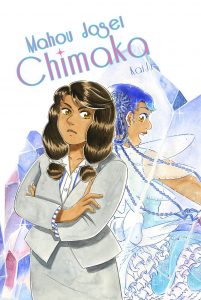 This magical girl comic features a protagonist named Chimaka who is a former magical girl named Shimmer Shimmer Sky Patcher. Fifteen years after failing to defeat her greatest enemy, breaking up with her destined boyfriend, and flunking her college entrance exams, Chimaka is in a downward spiral and working as a chemical engineer. However, when her greatest enemy makes a return, Chimaka must find a way to become a magical girl again with the help of her best friend Pippa.

One of the most notable aspects of this comic is its plot. In magical girl anime and manga like Sailor Moon and Cardcaptor Sakura, you always see magical girls be victorious against their big foes and then go on to live happily ever after with their love interest. You never see them lose against their ultimate enemies and you never see them age beyond their teen years. With Chimaka, you can see this occur and see her learn something in the process.

Besides being fresh, the plot is also a satire and twist of the magical girl genre as well as a homage to it. The satirical elements come from things like Chimaka’s magical girl name Shimmer Shimmer Sky Patcher and Chimaka’s failed attempts to transform. In one scene, she throws her transformation compact into the air and yells the words to transform only to have the compact hit her in the head. Moments like this add humor to the storyline while keeping it at a good pace.

Meanwhile, the twists involve certain magical girl tropes seen in almost every magical girl anime and manga. These include the “destined boyfriend” trope, the “starry-eyed heroine” trope, and the “cute animal sidekick” trope. The twists that occur make the storyline original and mature and will satisfy long-time magical girl fans.

As for the homages, the most obvious one is Sailor Moon inspired. Chimaka’s magical girl hairstyle and outfit, her weapon, and her transformation brooch will be Easter eggs to Sailor Moon fans. Another homage is in the artwork, which is strongly reminiscent of the drawing style of CLAMP, an all-female team of manga artists and writers that has created some of the most beloved magical girl manga.

Another great aspect of the comic besides its plot is its characters, the titular Chimaka and her best friend Pippa. 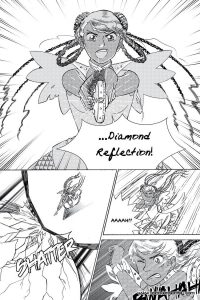 Chimaka is a woman of color, something not seen too often in classic magical girl works. More importantly, Chimaka is someone that is relatable, especially to young adults. Anyone currently experiencing a quarter-life crisis will empathize with Chimaka’s hopeless and stuck state at the beginning of the comic. By the end of the comic, Chimaka has become an inspiring character that will resonate with readers.

At the same time, Chimaka is not the only inspiring character. Pippa has a unique point-of-view on life that helps Chimaka rediscover her magic. She is also a good friend to Chimaka because she is sensitive to Chimaka’s feelings and doing her best to make her feel better without forcing her to just “give over it”.

In addition to the plot and the characters, the artwork is gorgeous. As stated earlier, it is reminiscent of CLAMP’s iconic drawing style, especially with certain things like flowers, insects, and Chimaka and Pippa’s hair. One scene involving Chimaka and Pippa is notable because the way they and the background are drawn is reminiscent of the dance scene from the magical girl anime film Adolescence of Utena. However, there is also a comedic drawing style reminiscent of Garfield comics, particularly with certain facial expressions like fear and shock. 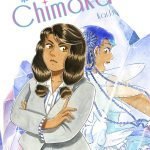 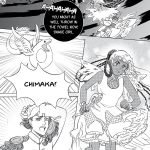 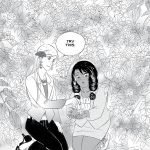 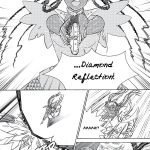