A sphinx-like beast with the face of a man, the body of a lion, and the tail of a dragon, a manticore is a creature from Persian mythology at the center of an intriguing prison horror story.

The first thing that stands out when you crack Manticore open is the stark black and white artwork, a creative mix of solid blacks and intricate cross-hatching makes for a vivid look. This is not seen much in the modern world of comics where the proliferation of affordable computers and software packages have made it so that even the most low budget indie title can have full color artwork. The art here is a perfect match for the story, full of personality that makes clear this is an ugly and grotesque horror story with ugly and grotesque characters in an ugly and grotesque setting.

That setting is a federal prison camp and as much as I’d like to say otherwise, it starts off pretty much how you would expect a prison based story to start with an introduction to (presumably) the main character who is a white collar type who may or may not truly deserve to be in the situation he finds himself in alongside his fellow inmates- the wise older inmate who serves as a mentor figure, the Aryan Nation muscle head. 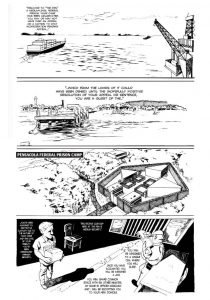 they serve the story well enough. If anything, I think this is where the story suffers from being published broken down in pamphlet form as opposed to being published (and read) in full from jump. The one thing that could serve to upset the typical jailhouse dynamic does not occur until the end of the issue- unless you come in already sold on the intriguing premise of a jailhouse horror story involving a mythical beast, there’s not much to this first issue by itself to sell you.

As noted upfront the art is in stark black and white so there is no colorist; however, I would again like to credit the artist, Ian Gabriel for his creative use of blacks and cross-hatching to establish a mood and atmosphere for the book.

The series writer Keith A. Miller does a serviceable job of also lettering the book, while there are a few spots where the dialogue seems to flow in a manner inconsistent with “typical” comic book convention, it is nevertheless readable and easy enough to understand what is going on.

All in all, I think Manticore has a lot going for it and is an intriguing enough concept to at least see where the story goes. And at the risk of sounding like a broken record, I cannot praise the art enough, as it is apparently the artist’s first published work, it is certainly a worthy debut. 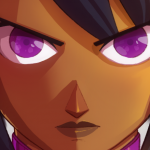 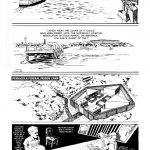 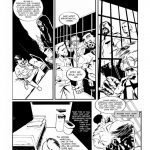