As important as the current Black Panther comic is, garnering a ton of attention and praise, 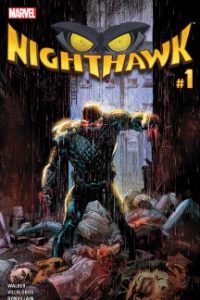 deservedly so with two issues in as Coates and Stelfreeze are doing amazing work, I feel that the spotlight is missing another important comic. David F. Walker and Ramon Villalobos’s Nighthawk is not only as important as the Black Panther, it’s more relevant to what’s going on in our world today.

I picked up the comic book Nighthawk on the strength of Walker’s writing. You might have heard of his other books Cyborg, Powerman and Iron Fist, and Shaft, as he always brings it. But with Nighthawk it’s the message that trumps the character and that has me hooked. Like the best sci-fi is a mirror to the troubling social issues of today, and historically Marvel has always taken on social issues. In this case Nighthawk doesn’t use stand-ins or allegories, instead it’s gritty violence and real dialogue drive home the importance of these problems, tackling issues of race, police brutality and gentrification.

But let’s back up a second in case you didn’t know anything about Nighthawk or his team the Squadron Supreme. First, there have been several iterations of the character, the parallels to the other rich guy orphan, turned nighttime vigilante are apparent, as they were meant to be. The Squadron was initially created to be Marvel’s spin on the Justice League, and this version was reimagined by J. Michael Straczynski and Gary Frank in the 2003 comic Supreme Power.

Now make no mistake Nighthawk is not the black Batman or a Black Panther wanna be, this Nighthawk aka Raymond Kane is hardcore. The sole survivor of his world (Earth-31916), transplanted here after Marvel’s last Secret Wars, he’s a hero flawed not by the death of his parents, but the memories of their warnings to not let rage drive his existence. 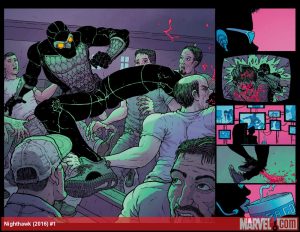 Now in the proper Marvel Universe (Earth-616), he is the current leader of the Squadron Supreme, a team comprised of Squadron doppelgangers, all survivors from different doomed Earth’s who do not want to lose another home. This Squadron takes justice to the next level, instead of stopping trouble, they work to prevent trouble from ever happening, hunting aliens and even executing Namor for his hand in destroying one of those doomed Earth, but that’s another book.

In his solo book Nighthawk, he takes crime fighting in Chicago a step further by policing the police. Nighthawk is feared by both criminals and cops, and very early on it’s established that he will not let police exploit their position as law enforcement, going as far as needed to protect the innocent.

Of the 2 issues to hit racks so far, Nighthawk has blown up a white supremacist warehouse protected by crooked cops and investigated a serial killer. By day as Raymond Kane he fights against the privatization of a housing project, showing the readers that not every problem has a physical solution. And if there wasn’t enough going on, Chicago is bracing for the results of yet another cop on trial for killing a black man in their custody. 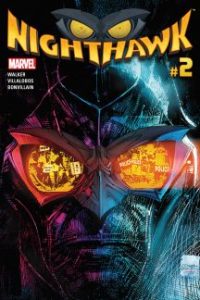 Nighthawks’ afropunk technical genius Tilda, a reformed supervillain. Tilda’s appeal is her wanting him to toss out one liners as he breaks bones or letting him know the types of guns a girl like her might want as a gift to comparing him to the Punisher’s and their zealous drive for justice.

Nighthawk is also working with one of the few police detectives he can trust to do the job, Detective Burrell, in their serial killer investigation. Detective Burrell reaches out to Nighthawk when he hits a roadblock in his pursuit of the killer. And while Nighthawk trust him he also feels that the police could do more with their time than trying to come up with spify names for the killer, Revelator.

Villalobos’s artwork is not as slick as most Marvel books theses days, but it’s that stylized grit that makes panels more intense from the bone fracturing to throwing razors cutting up cops and crooks alike. Blood splatter is not shied away from, making the brutality of violence very honest, real, while being used to remind us that violence is not something to be taken lightly. 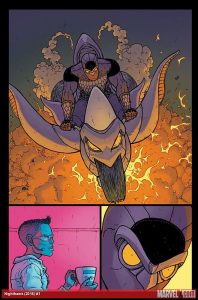 When you hear actors like Jesse Williams saying  “if you have no interest in equal rights for black people then do not make suggestions to those who do: sit down.” he’s not talking about the creative team of Nighthawk. I can only hope that in reading this comic, disenfranchised people recognize that justice will not be found with bullets, but with dollars, through supporting Creators of Color big and small, and like Raymond Kane, fighting the gentrification of poor neighborhoods. We can make an impact.