In the wake of YA dystopian films that show white female leads like Katniss Everdeen and various copycats, a woman of color has to wonder if there will ever be someone like her onscreen or on the page. Kayti Nika Raet’s first book in The Outsider Chronicles is one book that fills this gap. 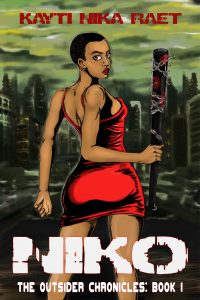 In a post-apocalyptic world not too far from ours, acid rain falls from the sky, food is scare, and flesh-eating creatures called Slithers are a constant threat. In one night, a fire destroys Niko’s food and shelter and leaves one brother dead and the other missing. Soon, she is taken in by a society of Slither-hunters in the city called the Rose Circle. All Niko wants is to find her brother, but the Rose Circle has other plans.

One of the best things about this book is its diverse cast of characters. Harmony Niko, the main lead, is a black street-smart teen who fights off Slithers with nothing more than a bat with nails driven through it. She’s also loyal toward her family and toward certain members of The Rose Circle who become her friends.

Meanwhile, Ari, Ben, Malik, and Duc are Rose Circle Members with interesting socio-political views and personal traits. Three of these characters are also in a polyamorous relationship, something that is rarely depicted in sci-fi. Far outside the city, there is a group of dwellers protected by Normandy and Lo, an Asian lesbian couple.

Besides the characters, the plot is very well done. It isn’t just about Niko’s fight for survival, but also a fight for how she will survive. She has to choose between being used by a self-indulgent, manipulative group or living on her own terms. She has her own resources and skills, but she can’t work alone. She has to figure out who is friend and foe and while that isn’t always easy, it makes for a compelling story.

In addition to the characters and plot, the setting provides a thought-provoking backdrop to both. The area known as Outside is a treacherous landscape with acid rain and Slithers. Food and water are scarce things that people have to scavenge, ration, and sell things for.

In contrast, Amaryllis City is a metropolis where there is food and water to waste and protectors like the Rose Circle to keep it safe. The only visible blots on the city are considered standard procedure: the hefty admission fee and the indentured servitude that Outside citizens must endure in order to become city citizens.

Overall, this book is a fantastic start to The Outsider Chronicles. It is an action-packed story with a great cast of characters that will satisfy your imagination and make you think. If you want a great dystopian coming-of-age book with a diverse cast of characters, then check out this book.