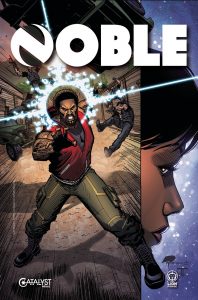 Free Comic Book Day ended a few hours ago at most shops, and at other stores, gaming tournaments/ hang out sessions are going on into the wee hours of the night. I made the rounds to my LCS (local comic book store), Challenges Games and Comics, picked up a few of the free offerings left over, and saw awesome creators like Don Hillsman, Raymond Sanders, and Dedren Snead.

In addition to picking up some free books, I bought the first volume of Ta-Nehisi Coates ’ run on Black Panther, and Lion Forge’s Noble #1.

Let me start by saying this: I downloaded Noble #1  on Comixology the day that it dropped, and it’s a testament to how much I loved this that I picked up the physical copy.

Over the past few weeks since my father passed away, we’ve had to do a culling of sorts in the Jeffrey household. A lot of my Dad’s stuff has found a home in our apartment, so I had to part with a bunch of books, comics, and DVD’s that I’d been holding onto for a while. These were all things I’d already decided to take to the local used book/ DVD store to trade in, so we were able to make the needed room.

I say all of this to say, space is at a minimum at my home, and to add any other new comics to this mix, the book has to have a special/ significant place for me as a reader/ writer/ collector.

Noble #1 is just that damn good.

Noble #1 is the first title in Lion Forge’s Catalyst Prime launch. Catalyst Prime at its simplest core is the birth of a new superhero universe.  When a group of astronauts are sent to space to prevent an errant asteroid from destroying Earth, things go a bit awry, and this leads to the introduction of super powered individuals in this new universe.

What has stood out to me about Catalyst Prime as a whole, were the moves that were both being made within the pages of these newly announced titles, and behind the scenes with their respective production teams.

With Senior Editor Joe Illidge at the lead, the Catalyst Prime launch has sought to create a world of super heroics where EVERYONE is represented. Not just one dominating sex, race, sexual orientation, etc.

The same is also true for those working behind the scenes of these upcoming titles. As a reporter whose covered the comics industry, and also being a comic book writer, this was a breath of (excuse my language) fresh f&^%$g air.

Find a talented group of writers, artists, editors, colorists, letterers, inkers, etc. from all walks of life, years of experience in the industry, and let them play in this new sandbox.

As a result you get a title like Noble #1. 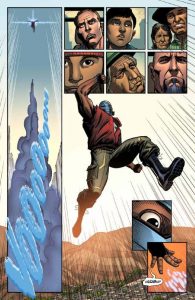 Choosing Sides), illustrated by Roger Robinson (Batman: Gotham Knights, Solo Avenger), lettered by Saida Temofonte (Lil Gotham, God Of War), and colored by Juan Fernandez (Deathstroke, Grimm Fairy Tales), Noble #1 is just friggin’ awesome. As a comic book writer, one of the first things that I remember learning was, “Hook the reader with the first issue”. Doesn’t have to be some bombastic Bruckheimer sort of ‘ish, but do something that will have potential readers scouring the shelves at their local local comic store week after week.

You do that, you’re golden pony boy.

Had to toss in a The Outsiders reference somewhere.

The book opens up with a flash back where we see Astrid-Allen Powell, the wife of astronaut, and story protagonist, David Powell, has learned that her husband has died as a result of injuries received during the successful attempt to save Earth from the aforementioned asteroid.

Let me start by saying a few words about this particular scene. There was so much story told here, with so little. Quiet panels, and silent images stood out in stark contrast to the great action that was to come in later pages, and it makes you empathize all the more with what Astrid was going through.

We jump forward to present day Argentina, where now, David is going under an alias, Julian Brass.It seems that a covert ops group has been sent to capture the former astronaut, with non lethal methods, which Mr. Brass is not too happy about.

I’ll leave things there, because what goes down is something to be read and appreciated. 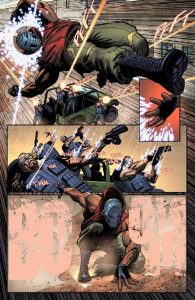 The action. Give me some well choreographed pages of comic book action, and I’m done. What the creative team does here is give David a chance to show off his telekinetic abilities with some awe inspiring feats of bad-assness. Everything between the scripting, dialogue, pencils, inks, colors, and letters all coalesce into a hodge podge of kinetic action that just keeps the pace of this book going at 100 plus.

I know at a certain point things are going to slow down, and that’s not a bad thing. But I’d be lying if I didn’t say I want more of David just kicking butt, and taking names.

The story isn’t all beat-em ups as we see some solid storytelling going on with great dialogue, some pretty crucial flashbacks, and with an ending that had this reader wanting more.

And did I mention that the hero of said tale is a black man? A former astronaut, father, husband, telekenisis slingin’, bad ass. That’s whose headlining this show. I know it’s a point that’s been brought up countless times in the months leading to this launch, and in other recent reviews, but it needs to be brought up again.

We need more of this. Not just Black Panther. Not just Cyborg.

I could go on, and on, but I think the chicken is starting to burn. ?

Do yourself a favor, and download Noble #1. Then go out to your local comic book store, and buy the hard copy.

You’ll be happy you did. 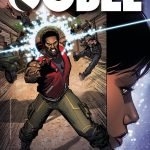 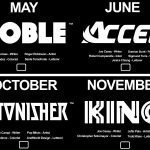 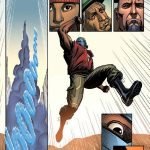 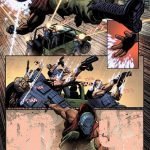 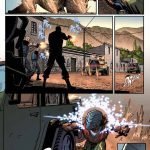