Two years after the defeat of the android dictator A.G., the heroes known as The Elementals have their work cut out for them. Using clues 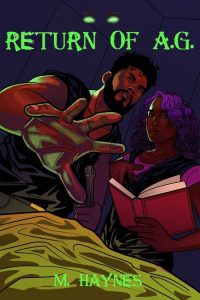 and connections, The Elementals discover the Prudence Kids that brought A.G. to life are planning something major. At the same time, the group’s dynamic takes a turn for the worst as old allies return and a traitor is discovered. In order to save the world again, the group will have to come to terms with truths about themselves and everything they know.

One of the best aspects of the Return of A.G. is the characters. The Elementals are known as generation five and are mainly a group of teenage superheroes with the power of the elements. De, a young Black man with the power to control fire, is the leader of the group. He can be rather impulsive, but he is willing to work hard to find The Prudence Kids no matter what. Along with De, the other main Elementals include M (a Black male with electrical powers), Mo (a white gay male with Ice powers), Jas (a plus-sized Black female), and Lucas (a White male with the ability to change shape and size).

Other characters include magical Elementals that serve as allies to the core group of Elementals, the adult mentors of the Elementals known as The Racksons, and the Elementals antagonists, The Prudence Kids. Together, these characters bring diversity, action, and adventure to a fun story. Morally, they are a mix of good and bad, which makes for a nice take on the good guys vs bad guys aspects found in many superhero works.

Despite the high points of the book, there were some flaws. One of them was the lack of women of color characters, with Jaz being the only Black female in the core group of Elementals. Although Jaz is powerful with and without her powers and she does talk to other girls her age, having her surrounded by mostly male characters was uncomfortable. Worrying about Jaz getting killed off or seriously injured marred the reading experience quite a bit.

Another issue is that there were not enough scenes where The Elementals were just allowed to relax and fun. The most they are allowed is one chapter to wind down after a particularly dangerous mission. Other times, it felt like they were too stressed out, mad, or busy. If it weren’t for their interpersonal relationships with each other, then they would’ve come off as too stiff and boring.

Despite the lack of women of color and relaxing moments for the characters, Return of A.G. is a fun adventure that kids and adults alike will enjoy. The diverse cast of characters and their awesome powers are sure to pique the interest of any superhero fan. If you need a good superhero read that isn’t a comic book, then give the Return of A.G. a try.