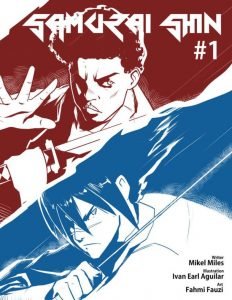 Sure to appeal to fans of manga and anime, Samurai Shin is a fun and fast paced tale of two young rival warriors seeking to earn the title of Samurai in a small town. Starting off smack dab in the middle of quite an intense training session, there are numerous hints given that for one of the warriors, the session isn’t quite just a friendly training session with a deep, albeit a bit one-sided friction, between the two. This friction threatens the viability of the town if the two can’t work together as directed by their sensei. As it turns out, it doesn’t take long before the old master’s sage advice is revealed to be well-founded with one of the main character’s life being turned upside down.

Creator Miles’ script does a solid job of introducing the characters and giving just enough backstory to entice readers to want to know more with key bits revealed here and left uncovered there quite deftly. Ivan Aguilar’s art is a perfect complement to the story, done in a manga-esque style but not in a way that is too derivative with vivid displays of emotion and personality. As separate credits for the letters and colors are not provided I can only assume one or both of the writer and illustrator are responsible. While not quite polished, there is a flourish to the lettering and balloon designs that mesh well with the art along with the even more impressive color work on display. Similarly uncredited, the cover deserves a bit of attention as a standout piece of artwork.

A quality effort definitely worth supporting, Samurai Shin does an admirable job of bringing readers into a fascinating world that seems familiar enough but offers enough intrigue and variation to make it worthwhile. One thing worth pointing out before closing- while the book features young protagonists and a bit of a “growing pains” type of storyline, it is not really recommended for younger readers without some level of parental supervision as there is a bit of strong language and a healthy dose of violent action.

You can follow the series at the social media links below: