Review- Shadows of Atlantis: Emergence of The Engi by Donsha Hatch
0 Comments 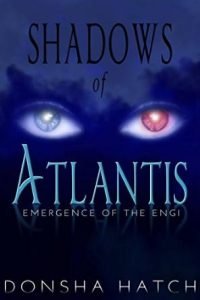 Nerds of color who grew up feeling out of place found refuge in fictional worlds and sometimes each other. There hasn’t been a lot of storytelling that speaks to that experience, but Donscha Hatch’s Shadows of Atlantis: Emergence of The Engi is an exceptional case.

The book tells the story of Eiris, a young man who discovers he’s a multiracial alien Prince from the planet of Atlantis. While attending a technologically advanced academy, the Earth-raised Prince learns to lead a motley crew of racially diverse teens in school and against the threat of the bio robotic species known as the Engi.

One of the best aspects of the book is how the author merged familiar aspects of sci-fi and fantasy together to create amazing worlds and character abilities. Different readers will notice different things, but I noted influences of Harry Potter, Avatar: The Last Airbender, and a bit of Tron. For instance, Eiris’s mixed race heritage gives him the ability to manipulate multiple elements. I also found the Slyph race exciting, because their members have technological abilities rather than elemental ones.

Another aspect of the book I found engaging was the idea of the nerd-jock hybrid. Xenogeek is the term for this hybrid and is used by students and staff at the academy as well as Eiris and his friends. This is a refreshing idea that fits well with the typical “nerd vs bully” aspect in the book, showing that nerds and jocks aren’t necessarily oil and water and that it’s okay to be be both. Despite first impressions, the Atlantian bullies were well developed as well, especially in the case of one particular character.

In addition to the fantasy sci-fi aspects and the term Xenogeek, the pacing of the book was well done. There is plenty of action that makes the reader keep turning the pages as well as interesting dialog that balances out nicely. When it comes to the dialog, the discrimination issues that pop up between the various Undarian races was handled well, especially with creative slurs like “tree hugger” and “void-walker”.

The only flaw in the book is the heavy-handedness of the “nerd vs bullies” trope in the book. At times, it felt like the author was overdoing the “it’s okay to be different” message of the book. While this is an important message, it is sometimes shoved in the reader’s face, especially through some of the dialog. Also, the book makes social awkwardness against the law, which may offend some readers who are socially awkward and see themselves in the characters.

Overall, this was a fun book that will speak to anyone who has ever felt out of place. Despite being a little cheesy, this was an enjoyable read filled with action and adventure. Both fantasy and sci-fi fans should give this book a try.