Review: Sleeping Under the Tree of Life
0 Comments

Sheree Renee Thomas has a new book out!  While that sentence was enough to make me want to read it, the 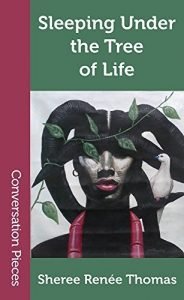 Four of the stories and 5 of the poems have been previously published, so you may have devoured portions of this collection before. To my delight, I was happy to see “River, Clap Your Hands,” which I’d raved about in my review of Stories for Chip: A Tribute to Samuel R. Delaney.  While I won’t recap my review, I will share that another previously published story, “Arachne & Medusa Jump Athena” is now one of my new faves. If Arachne and Medusa were from “around the way” and Athena was that mean girl in high school who swore her -ish didn’t stink, this story champions Arachne and Medusa’s supernatural payback. I always felt like Medusa was misunderstood anyway.

The collections’s first poem, “The Tongue We Dream In,” just sucks you right in.  I remember stopping and texting a friend, “Her poetry makes mine look like fingerpaint,” I said.  Here, get yo’ life with this opening stanza, “Our first language was wet/ mournful questions rang/ like falling stars/ in red clay throats.”  This piece connects us to ancestors and creation through the language of our dreams. It set the tone that what you will read from this point forward can’t really be read with the naked eye, your soul will be  deciphering the inferences behind the words. Yes, our roots are to this planet, to our great-great grandparents, and the spirits that will always linger between our world and theirs.  We can’t escape it, though the people from “the Grassdreaming Tree” might have tried on that new planet and under that glass bubble.  In that story, (acknowledged to have been previously published in Shotgun Lullabies and So Long Been Dreaming: Postcolonial Science Fiction and Fantasy,) black people have colonized a planet with two suns and lots of stone.  When a wild, white woman with grass baskets full of grasshoppers appears and appeals to the children who enjoy her stories of the times before, the elders make her stop.  But our past, our inherent connection to Earth and nature, will find us regardless of what planet we’re on.

The title poem, “Sleeping Under the Tree of Life,” seems to entwine the speaker to mythology, angels, God, and a tree. There’s love, and there’s a battle. Though it’s a short piece, I feel it does tie all of the other pieces together in that way that nature is personified, mythical beings aren’t much different than everybody else, and struggle and survival are inevitable. Many poems (“Repast,” “Unmarked,” “Burial Ground,”) have a theme of death and mourning, but also it’s natural beauty. An example is the lasting image in the poem, “Ruins”: “where from each grain of sand and lump of coal is a diamond and a bone.”

When Thomas uses personification, it’s believable instead of gimmicky. Whether it be rhythmic in “Urban Blight,” “See the walls with/ their gangsta lean/ see the porches pout/ and sag and scream”; or it gives something power, like the river in “Black River Ritual,” “It cracked her walls, dug in its tongue/ split them apart, swallowed her land whole.”  In fact, nature takes on a lot in her writing as trees, rivers, and skies provide protection, comfort, and wisdom.

In the final story, “Tree of the Forest Seven Bells Turns the World Round Midnight,” there is a wild take on Mother Nature knows best. Wilder is enamored with Thistle, an Earth-loving wild child who feels it’s time to meet her mother. He asks her, “Your mama live near the river?” then, “Your mama live in a tree?”  Thistle’s response roots the reader right in, “Mama the river and the tree.”  What Wilder won’t do to stay with Thistle is only compared to what he just doesn’t seem to want to believe. But, I’ve already said too much!

Like I said, Sheree Renee Thomas has a new book out!  A collection of poems and stories where the stories are poetic and the poems tell great stories.  The branches stretch back to creation and all the way to another planet, and the vines wrap around you and reach inside you to hold you close so you don’t want to miss a word.

On the negative side, you’ll have to flip through page after page of the publishing company’s success stories, but hey, that’s what the Conversation Pieces are there for. Clearly, they know talent and showcase it well.

Tuere T. S. Ganges, a South Jersey native, writes in Baltimore, Maryland. She was a June 2009 recipient of the Archie D. and Bertha H. Walker Foundation Scholarship to the Fine Arts Work Center in Provincetown. Her fiction has won prizes at the Philadelphia Writers Conference; and has appeared in the Shine Journal, Flask and Pen, Milspeak Memo, Mythium Literary Magazine, Wigleaf, Fiction Circus, and a Pushcart Nominated piece in Referential Magazine. Wilted and Other Stories, her collection of short fiction is available as an ebook on Amazon.com. When she isn’t trying to keep up with her teenaged children, she’s trying to keep up with her teenaged students. And when she’s had enough of that she entertains herself with countless games of Word Hero and livetweeting. Follow her on Twitter@tuereganges.

Article Topics: Sheree Renee Thomas | Sleep Under The Tree of Life | Stories for Chip: A Tribute to Samuel R. Delany