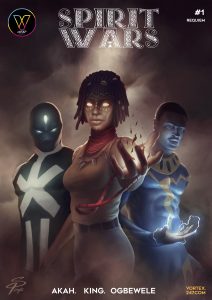 You may have read Marvel’s Civil War comics or DC’s Flashpoint, but they aren’t the only ones who can do crossover events. Vortex Comics, a Nigerian comic book company, has built a good roster of African superheroes since 2013. Through characters like Strikeguard, Agabara, and June XII, the company has created their own comic book universe. Now, the company has launched a new comic book event known as Spirit Wars.

The first issue of the event focuses on the character Ajageba as he comes back from the dead and attempts to put together an army of African gods to fight against angels in heaven. Ajageba is the general of Sango the god of thunder, but Vortex Comics readers also know him as one-half of the superhero Strikeguard.

One of the best things about this first issue is how it is is designed for new readers of Vortex Comics as well as current readers. Ajageba briefly sums up his time as Strikeguard within the first ten pages of the comic, so you don’t have to know any backstory prior to reading this comic. 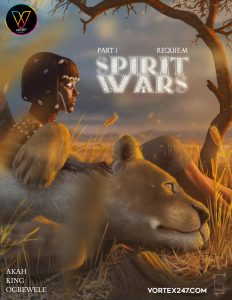 At the same time, you get cameo appearances of Ajageba’s former human host Ayodele, which seems to suggest that the two might become Strikeguard again in the future. Besides Ayodele, you also get an appearance from June XII toward the end of the comic that establishes him as a hero while providing a cliffhanger for future issues.

Besides being a gateway for readers, this first issue also does a good job setting up the overall plot that is the Spirit War. While things aren’t too clear as to why the angels and the African gods are fighting, the “how” is shown in moments that seem to be snowballing into an all-out war. Both the gods and the angels appear to have divisions in their ranks and it might take the good forces from both sides to save everyone.

A final notable aspect of the comic is the artwork. While the story was conceived by Somto Ajuluchukwu and written by Mamode Ogbewele, the lines and colors in the book are done by Somto Akah and Jimmy King. The characters designs are drawn realistically and well, but the highlight of the art comes with seeing the colors glow at certain moments. These moments are usually when the characters call upon their powers, adding a brilliant visual effect.

Overall, Spirit Wars #1 is a good start to Vortex’s comics crossover event. It is filled with plenty of action and mystery that will appeal to superhero fans. Vortex Comics readers old and new will enjoy this comic, especially since it puts a refreshing spin on crossover events.