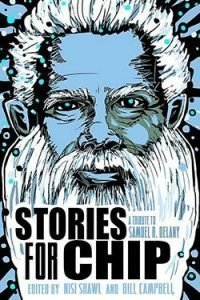 Stories for Chip: A Tribute to Samuel R. Delany, edited by Nisi Shawl and Bill Campbell, seems like an amazing way to thank Delany for decades of great stories to read and inspiration for writers. Each of the 33 entries either hints at Delany’s influence on the writer, or is a strong academic argument that Delany has been one of the most important voices in speculative and science fiction literature.  The tribute is definitely worth reading even if one had not had the pleasure of reading Delany’s work.

I had great fun reading Nick Harkaway’s, “Billy Tumult.” But who wouldn’t appreciate a short story about a psychic brain surgeon who ventures into his patient’s psyche only to find himself in a Grendel-infested western?  The humor and intrigue kept my attention throughout, but I really loved the idea of having that job. Who would need TV if they were paid to visit the depths of a person’s mind with the hopes of overcoming whatever monster lurks in us all?

I also loved “River Clap Your Hands” by Sheree Renee Thomas. Her writing was so poetic. The imagery was quite beautiful. I also found her crafting of a natural disaster we’ve experienced in our recent reality with the mysticism of age-old tales of magical creatures that have the ability to live among us, masterful. Another favorite piece is co-editor Nisi Shawl’s collaboration with Nalo Hopkinson in “Jamaica Ginger.”

The steam punk melding of 19th century New Orleans and clanky robotics was exciting while spotlighting the boundaries and expectations a black girl approaching womanhood most likely faced at that time. Should this brilliant young woman remain in the shadows of her boss who took credit for her work or could she actually embrace the exciting world she daydreamed about? Should she fancy a budding romance with the black boy her age? What future did he have for supporting her and her ailing father? Or should she consider becoming a placee and live a comfortable, yet illegitimate life? The dialogue was superb and I can’t help wishing for a movie to see how the images the story left in my head would turn out on the big screen.

In addition to the devourable fiction, there are a few nonfiction pieces that glorify Delany’s genius and influence. Isiah Lavender, III and Walidah Imarisha’s articles both give great argument as to why Delany and science fiction should be taken seriously in the literary world. Both recount humble beginnings where being black and also being science fiction lovers wasn’t always acceptable. Both have distinctive evidence to support that science fiction has played a valuable role in literature as a whole as well as in the authors’ personal lives.

Delany, in all his literary wisdom, and also his inviting personality that has comforted many budding writers that have been fortunate enough to meet him, has validated so many science fiction lovers. The pieces shared here aren’t fanboy and fangirl gushing about meeting Delany or the deification of one of his characters. These are scholarly works filled with research and documentation. If someone asks, “aren’t you a little old for _______________?” you can pull out one of these pieces to support your debate.

My one criticism is on the structure of the collection. I like to turn to the table of contents and have a clear understanding of what is fiction and what is not. The essays are mixed in with the short stories.  I also would have liked to see more new pieces as a number of pieces were previously published. Of course, I think what I’m really saying to all of that is, “When are we getting part 2?” Tributes to Delany can keep coming for ages.

Head here for more information on the collection.