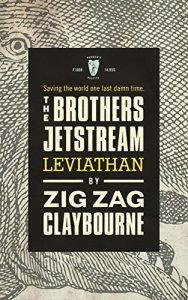 “You’re just joining us, and our story is already in progress. You never need to agree with us, but you have to trust us.” This line, uttered by the character Desiree Quicho at just about the midpoint of the book pretty much encapsulated what I’d been feeling as I read The Brothers Jetstream: Leviathan by Zig Zag Claybourne. I felt like I’d turned into a television show that had been entertaining its viewers for about three seasons. It doesn’t make the ride less enjoyable but you kick yourself because you don’t know the backgrounds and back stories of all the characters, you don’t get the inside jokes, and when someone exhibits a super power you don’t understand how any of it works.

That said, if the story is intriguing enough during your drop-in viewing, you let it play out and vow to binge watch what you’d missed at your next lazy weekend or sick day. This book had that effect on me except I couldn’t find previous volumes on Amazon. I just had to trust that it would all make sense in the end, so enjoy the witty banter, the out-of-this-world characters, and the occasional orgy as the tale of how Milo and Ramses Jetstream attempt to save the known physical world from some pretty evil plotting coming from another realm of earth.

The Brothers Jetstream start out on a much needed vacation aboard the Joyeux Voyage cruise ship and enjoying the company of two “lovely diasporic queens” they’ met: Neon Temples and Yvonne DeCarlo Paul. Women who prove to be more special than their beauty, as one has the psychic ability to witness Ramses twist the multiverse and slap the fye out of a rude waiter that normal people never notice and the other word her dog tags suggesting she was tough enough to hold her own in any situation.

But the vacation gets cut short when Maseef Or-Ghazeem, a badass whale whisperer, summons Milo to leave the ship and join him on top of a whale so they could discuss the disappearance of Maseef’s sister, Lolita. Then we learn that it has something to do with the False Prophet Buford Bone.

Buford is a powerful manipulator who keeps the real world focused on mundane things like reality shows and money although it isn’t exactly clear what he gains from doing so. He’s very old, he’s cloned himself many times, and he can control people’s minds to do anything he says though he doesn’t seem to care that he gets them killed in the process. He took Milo and Ramses in at a young age and taught them how to use their abilities of teleportation and reincarnating the dead, as well as how to power up their chi so their spirits can get some punches in during a battle. (At some point, the boys live with Kichi Malat, who they say is their real father but that isn’t clear.)

Now separated and mortal enemies, Buford goes on his own voyage to the Mount where he plans to take things to another level. The Mount itself is another level, it’s in another realm, Atlantis. Buford, hated by those in the multiversal know, is wanted by the brothers, and by vampires, and by THOOM. So, when he goes missing, the Jetstreams need to find out who has him because Buford is too powerful that anyone would kidnap him to do good.

During this quest, the Jetstreams team up with Neon and Yvonne, colorful angels, talking dragoons, the Agents of Change, a few psychics, and a vampire. In addition, there’s Smoove, a 700-year-old Jamaican and Desiree Quicho, his mortal-but-badass Mexican wife. The two are captains of their ships the Semper Fi and the Linda Ann; Milo, Ramses, and the psychic Fiona are the usual crew.

They travel and battle in Atlantis, the Blank which is the realm between Atlantis and the real world, Idaho, Detroit, and New York City. Meanwhile Djinn genies, pygmies, vampires, and even Adam and Eve stand in the way of getting Buford and ending his reign once and for all. Yes, the Adam and Eve: the stunningly attractive, coffee-loving, and extremely deadly parents of all humanity play an interesting part. (BigFoot also makes an appearance but he’s just a jerk.)

However, the subtitle is Leviathan. I won’t spoil how this ancient, humongous, telepathic fish plays a part in all the chaos because this book really is one you need to read for yourself. It’s intelligent, funny, and action and fantasy packed. The Brothers Jetstream: Leviathan is entertaining even though you might feel like you’ve missed something for the first half of the book, or get confused by so many named characters (and how many of them are red-heads). It’s definitely worth the read and I recommend it to any sci-fi loving, brainy tenth grader and up.