Review: Thug Angel- The Rebirth of a Gargoyle
0 Comments

Werewolves, vampires, and gargoyles? Oh my! I don’t think we’re in New York anymore. Have these demons and 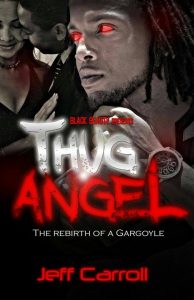 immortals always been around? If you read Thug Angel: The Rebirth of a Gargoyle by Jeff Carroll, you just might think so.

Science fiction meets urban fiction as 7,000 year-old (no, not a typo, he’s over 7,000 years old) Maurice Keita protects the Front Street Projects (FP) as the superintendent by day, and a werewolf and vampire slaying gargoyle at night. He’s so good at his job, it’s been years since he’s seen a vampire or a werewolf around the FP’s since he and his late wife wiped them out in the battle that took her life. So, Maurice pretty much keeps the typical drama out of the neighborhood where he struggles with raising his daughter Eni, short for Nzinga, alone until homeless people start getting ripped apart by some wild animal.

Maurice knows how werewolves roll so he transforms into a green, winged gargoyle at night to investigate and soon finds out the werewolf only moved into his neighborhood because vampires ran him out of his old hunting grounds not too far away. Maurice must ask Egyptian god Ptah for permission to expand his territory of protection to make New York vampire-free again. While Ptah and the goddess Nut argue over breaking the rules of Atums (humans granted immortality by the gods to protect humans from demons, later to be known as gargoyles), the vampires known as the Ortega Brothers look to expand their territory as well.

Where? The Front Street Projects, of course.

Will Maurice be able to battle these powerful vampires and their army of ghouls by himself while keeping his innocent, mortal, teenaged daughter safe and oblivious to it all? Check out Thug Angel to find out.

The pros: well, I haven’t read a book about a vampire-slaying gargoyle before so that was intriguing. Carroll weaves in a lot of Egyptian mythology, the history of the African diaspora, and ancient earthly homeopathy into this action-packed tale. If you like battles and blood baths, this book will feed your blood lust. I’ll give this one spoiler…dude rips a guy apart by the legs! (Make a wish! Ouch!) And if if you like a decent, anti-violence message that hopes to uplift our people, I don’t think this tale will disappoint you either.

That said, I still recommend this book for readers teen through to adults that still enjoy a good vampire slayer story.