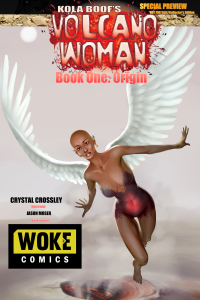 In the past few years, black women have made progress in mainstream comics and in independent comics. While it took until 2016 for Marvel comics to hire black women, black women have been killing it by creating and publishing comics on their own or through small press. One such work is Woke Comics’ Volcano Woman, which has a team of black women that includes writer and creator Kola Boof and illustrator Crystal Crossley. Book 1 of the series is available to read online for free.

The book tells the story of news reporter Nessa Tyler, a black woman that comes from a loving family in Philadelphia. One day, the government kidnaps her and her brother Piru and sacrifices them to a volcano in Sudan. After dying, they are reborn and given spiritual powers of the volcano and the wolf god. Chosen by the African ancestors, they must save the world from the wrath of the demonic spirit, the Nameless Daughter of Phumkut.

Right off the bat, one of the best things about this book is the diversity. Not only does this book have a team of black women working on a black female protagonist, but the book shows different sides to the black experience. Nessa Tyler embodies black womanhood through her experiences. Her brother Piru is black and gay and presented in a way that doesn’t make too much of a big deal of his sexuality. Nessa and Piru’s mother is deaf, while Shane Johnson, a secondary character, has a mother who embodies the colorism and self-hate.

Besides the variety of experiences, the mythology is rich and fascinating. By incorporating Egyptian and Somalian mythology, the origin of Volcano Woman, Piru, and their abilities are taken to mystical heights. The powers of Volcano Woman come from two magic earrings that are the embodiment of the fertility and river goddess Noorpani-Patra and the cat warrior Baast. Meanwhile, Volcano Woman’s enemy Phumkut comes from an Ethopian creation story. These touches are a refreshing take on a superhero origin story, especially since some of the well-known mythological superheroes are European based.

Illustrating the characters and the story is Crystal Croosley’s wonderful artwork. Characters are drawn realistically with great detail when needed while backgrounds resemble water-color paintings. The most striking artwork is seen during mystical moments such as Nessa Tyler’s and Piru’s death and rebirth. On these pages, the colors are vivid and eye-catching and the detail is spectacular, suiting the mythological elements very well.

A final aspect of the comic that is notable is the dialogue. It is peak blackness, sounding just like you what you hear in a African American fmily and African American people. Sometimes it is introspective and loving, like when Nessa thinks about all the black women in history she admires. Other times it is humorous, like when civilians mistake Phumkut for Beyonce. Kola Boof has done a wonderful job keeping the dialogue realistic and engaging to the reader.

The only flaw of this comic is that it moves a bit fast. When the book opens, we see Nessa Tyler’s and Piru’s old lives for two pages and then suddenly we see them sacrificed to the volcano and then being reborn and getting their powers. The rest of the book continues in a similar manner, giving us glimpses of Nessa and Piru’s personal lives before rushing back to the action. Future books would be better if they could slow down for a bit and give us more time to spend with the characters outside of their powers. 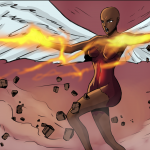 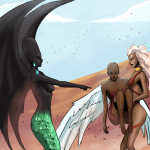 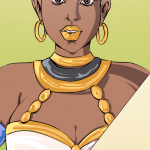 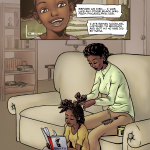