powered devices of wonder. Jules Verne. Gal Carriger. Milton Davis. These are some of the ideas and creators that come to mind when I think about the genre known as steampunk.

From works as varied as Beyond The Gate, Steam Boy, From Here To Timbuktu, and a host of other examples, myself as a burgeoning fan of the genre to more dedicated fans, have no shortage of ways to involve themselves in the steampunk genre. Defined by Wikipedia as “a subgenre of science fiction and sometimes fantasy that incorporates technology and aesthetic designs inspired by 19th-century industrial steam-powered machinery”, steampunk has captivated the minds and hearts of fans across the world.

As a regular convention goer both in front of and behind the booth, I’ve seen the fandom on full display ranging from numerous panels on the genre, to the superb and painstakingly detailed cosplay that can be found in great abundance on the convention floor.

There are also conventions which cater specifically to steampunk including such examples as Anachrocon, The Steampunk World’s Fair, and the Wild, Wild West Con. One such convention which is enjoying its first year as a gathering place for steampunk fans from all walks of life is Detroit’s Motor City Steam Con.

Created and organized by proud steampunk fan, and steampunk themed bookstore owner (Off The Beaten Path Books) Salathiel Palland, the convention seeks to provide a three day experience featuring numerous in depth panels on the genre, prominent guests from the realms of steampunk, and vendors galore, coalescing into a weekend filled with fun and good times for those seeking to immerse themselves in the fantastical world of steampunk.

“I love the DIY aspect of it all and the creativity,” Palland said in an interview. “Pretty much whatever you can imagine you can make or have made. I have seen some truly ingenious cosplay in this genre.”

Expanding more on her love the genre, Palland explained how she became involved with steampunk. 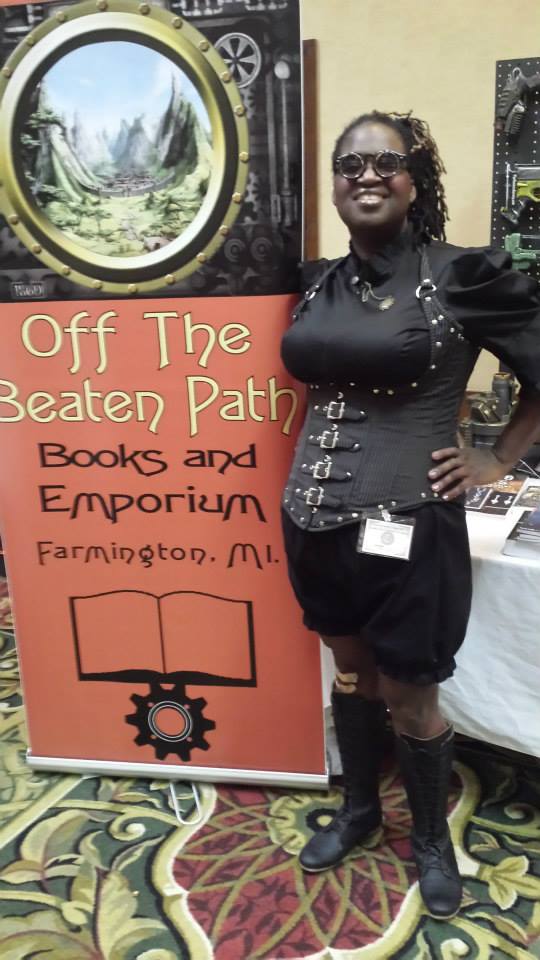 “I first became involved in steampunk through the literature before I even knew what the genre was called. Books like Anubis Gates by Tim Powers and Perdido Street Station by China Mieville really got my imagination going. Then I was introduced to authors like Cherie Priest, Gail Carriger, and R.S. Belcher who really rocked my world. I was introduced to the fashion and the musical aspects of the genre after that,” Palland said.

“I opened the first steampunk themed bookstore in the Midwest, Off the Beaten Path Books. I produced many events and concerts for the steampunk community and hosted several booking signings from steampunk authors such as Cherie Priest. The storefront closed in February 2016 after 5 years and I have been taking it to conventions since.”

So with her proverbial “geek flag” on full display, Palland has decided to take her fandom a step further, with the creation of the Motor City Steam Con. “We had a steampunk con, World Steam Expo, that was amazing, but it has been defunct for over 4 years now. There were some valiant attempts to put on other cons in its place, but for one reason or another they didn’t take. In 2015, when there was no convention at all, I decided the time was right to try something new, hence the birth of Motor City Steam Con,” Palland said.

“But this was no hasty decision. I had been dreaming and working on this con for 2 years before I mentioned it to anyone. I wanted to make sure it would have the foundation necessary to stand up to the challenge. The first thing I had to make sure of was that I had the right location, the right partner in Reloaded Events, and the right staff. I now I have all of that.”

As mentioned before, the event will feature a slew of events, panels, vendors, musical performances, and other items of note that should keep convention goers busy throughout the weekend. Palland  gave an idea of what visitors could look forward to, giving a varied run down of what’s to come this July.