The Reeves/ Ball creative duo is at it again, and this time they’re delving into the world of all ages sci-fi adventure. 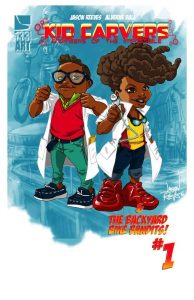 The creative team behind such works as One Nation, and When We Were Kings, Alverne Ball and Jason Reeves, have created Kid Carvers: Engineers of the Impossible. As summarized on the series website, Kid Carvers is “an all-ages book series that revolves around two child genius’ Marley & Charley Carver, who use their superior minds to investigate strange occurrences & mysteries only they can solve. They’re scientist/private detectives…only smaller.”

So to put it simply when I heard about the concept for this series, I knew I had to reach out to the creative team and pick their brains about the web comic series that drops weekly every Wednesday. Reeves and Ball took some time to talk about the series, and what readers can expect to experience in the continuing adventures of the Carver siblings.

BlackSci-Fi.com: Tell us a little bit about Kid Carvers.

Jason Reeves:  Kid Carvers is about twins Marley & Charley Carver, who also happen to both be kid geniuses. The setting is New Orleans, LA. The twins’ stomping ground/base of operation is their grandmother ‘Moonie’s backyard, where she takes care of them after school. Marley is a cross between Quvenzhané Wallis’, Annie, and a mad scientist, and if you put Doc Brown’s brain into Marty Mcfly, with old Kanye’s fashion sense, you get Charley.

They have a bit of a time dodging bullies in school and outsmarting their teachers, but in their spare time they investigate strange occurrences & mysteries only their brilliance can solve.

BSF: How did Kid Carvers come together?

JR:  Having done a few more conventions in the past couple years, we saw that there were few if any all-ages books that the kids could take home with them. As much as we love our sort of rated ‘teen’ comics, looking at all those little eyes peering over the table con after con and having to tell their parents that maybe this book or that was a little too old for them, was a problem for us.

So we set out to fill that need as we saw it and Kid Carvers was born. We (Alverne, Kemi, Joe, Brandi, & I) really loved the optics of shows like Doc McStuffins, the Boondocks, comics like Tuskegee Heirs, and web-comics like Bounce, so we set out to create, inspired by content with an animated feel.

BSF: Is the title of the story a reference to George Washington Carver? If so what elements from Carver’s background did you try to incorporate into the Carver children?

JR:  Yes. We wanted to conjure the idea of Black inventors, many that may be the unsung but brilliant minds of our past. Who better to represent the idea than George Washington Carver. I’m a big fan of the inventive mindset, a mind not just willing to rest on convention, but step outside of it to find more optimal methods, and in turn creating new more efficient conventions.

Carver was all about that, creating alternative means of production for poor farmers to compete, and even thrive with the resources (peanuts,….) already available to them. That spirit of overcoming is definitely something I wanted to infuse into the twins.

We plan to shine a spotlight on Black inventors, engineers, and scientists who would be the twins’ heroes. Expect to hear mentions of some you’ve heard of and some you haven’t. 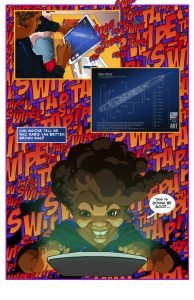 BSF: Why do an all ages title?

JR: For da kids. Wi-Tang is for the children.

Alverne Ball: For me it just made sense of the natural progression of where my writing was taking me.  I’m currently developing a series cartoon for children, so when Jason started talking about doing an all-ages title my mindset was already in that space.

BSF: Do you feel the industry offers a balance when it comes to providing all-ages comics for younger readers?

JR: I think it offers many comics, books, etc., but not necessarily a balance. I still want to see more POC stories, heroine stories, LGBTQ stories, different locales and cultures. The richness of the world’s stories has definitely not been tapped yet.

AB: I agree. The other day I was meeting with a writer friend and we came up with a YA novel and the first thing we asked ourselves was who are the African American YA writers or major blockbuster characters, and we couldn’t see them. Now some of that may be on our lack of knowledge, but again, I couldn’t name 1 that had been adapted into say a film or TV series or video game, etc.  So the burden is on creators like Jason and I to create content that reflects our colorful world so that our children and many more can see themselves.

BSF: Correct me if I’m wrong, but for you both the all ages realm is sort of new ground for you. How did you approach this with having a background of mainly doing teen and up titles?

JR: Al can write anything. He’s great at putting himself into several character’s heads, and he has two young kids to draw from, so I’m not sure if all-ages is that much of a stretch for him. For me, I needed a little coaching.

I’m always about the action/adventure, but I had to tone some of it down for the younger crowd that may be consuming these ideas. Al would be like, ‘Dude, you can’t have them jump the bikes off the roof here. It’s too dangerous for impressionable kids. What are you thinking?!’ And I’d be like, ‘Awww, man, but it’s such a cool action scene! …ok, you’re right.’

Seriously though, I think we both have always had ideas that we wanted to conceive that could fit into the realm of an all-ages title. It was just a matter of us honing in on a project that lit a spark in our respective creative engines. 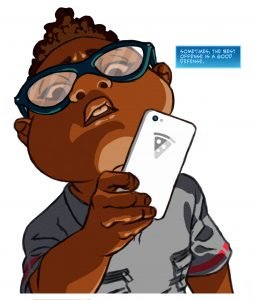 AB: Yeah, Jason’s right, we had to find something that we could both just fall in love with the idea.  I grew up watching cartoons; I used to be a cartoon head.  I mean so much so that I would memorize the schedules of 3 or 4 different channels when it came to my selection of cartoons.

As Jason said it wasn’t that much of a stretch for me to really fall into the space because deep down we’re all kids, plus having 2 younger kids helped, but overall kids just want to be entertained just like any adult.  The hardest part for me sometimes was telling myself that its fiction, that kids will get it and that I don’t need to over explain it.

JR:  In my opinion: very. I believe positive representation is a key component to any social group or culture’s intellectual, physical, and financial prosperity. Before any endeavor to take positive action, we have to be able to visualize ourselves in the task. So it’s a responsibility for the artists/storytellers/creators of that culture or group to produce positive imagery for its people to draw upon when it’s time to build that prosperity.

AB: I totally agree with Jason.  I remember watching Lord of the Rings and thinking, “man, I love these characters and films, but I don’t see me as a person of color in any them,” which is probably why I started creating a fantasy comic with Serena Guerra.

But the lack of representation made me feel as though I didn’t belong in that theatre or in that world and it was easy for me to disappear and not be missed.  Now I know that wasn’t the point of the film or the books, but unintentional consequences is that people of color rarely exist on fantasy settings. Well, until creators like Jason and I begin to break down that wall.

Click the link below to head to page 2 of the interview.