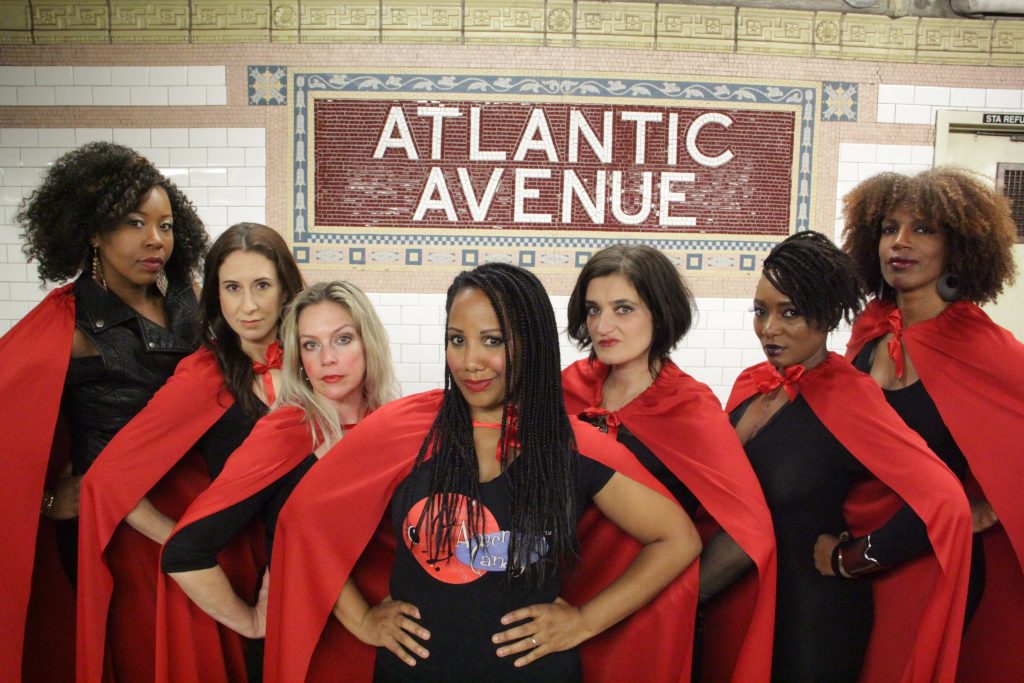 Hollie Harper (center) with cast members of AMERICAN CANDY: The Fempire Strikes Back

‘Star Wars: The Empire Strikes Back” is one of the most Iconic Sci-Fi films in history. “In 2010, the film was selected for preservation in the United States’ National Film Registry by the Library of Congress for being “culturally, historically, and aesthetically significant.”  The story line is as old as David & Goliath, but for Star Wars fans who were distraught by the fact that the Galactic Empire had come under the rule of the tyrannous Darth Vader, it was refreshing to see the underdog at the time (Luke Skywalker) rise up and STRIKE BACK against the bad guy.

Today in real life, Hollie Harper, Creative Director of the hilarious, Brooklyn sketch comedy troupe American Candy has decided to do just that—with a slight twist.  ‘AMERICAN CANDY: The Fempire Strikes Back’ is a hilarious spin on the Sci-Fi classic that aims to combat misogyny and misogynoir through comedy and empowerment.

In addition, Harper has teamed up with GEMS, a nationally recognized organization that serves young women who are victims of commercial sexual exploitation and domestic trafficking. Representatives from GEMS will be in attendance for the show to provide information and accept donations.

So what inspired Harper to create ‘The Fempire Strikes Back’? After witnessing a slew of attacks against women via the internet, and learning of the harassment and hatred directed toward fellow actress and comedienne Leslie Jones, Harper was fed up, and decided to use her platform and creativity to do something about it.

BSF recently had a chance to speak with the talented comedienne for a quick Q & A session to get the 411 on her show this weekend.   Check out our chat below.

BSF: What is AMERICAN CANDY?

Harper: AMERICAN CANDY is a progressive, smart sketch comedy show. We like to peel back the layers of American zeitgeist.

BSF: Why did you choose ‘The Fempire Strikes Back’ as the theme?

Harper: Fempire– because the expected roles of women are shifting, and that shift is shaping the modern conversation of who we are as a country. Like the election, Title 9, street harassment, reality shows and women directors.

BSF: Tell me about the show.

Harper: ’The Fempire Strikes Back’ is a sketch comedy show where each sketch has a different take on what it means to be a woman in America.

BSF: What was the creative process for the show?

BSF: Why did you want to partner with GEMS for this show?

Harper: I first saw the documentary about GEMS on my birthday six years ago and it brought me to the realization that millions of girls around the world are never given the chances I’ve been given in life. Then after being on social media a lot these past few years, I realized exactly why so many girls are given the shortest end of the stick – many people’s  ideas about women are still antiquated and quite hateful. Every time a major story has a strong female component I see the hate and vitriol directed at women. That grabs me and my brain starts writing.

BSF: What do you want  people to get from the show?

Harper: I want to make people laugh. I want people to see AMERICAN CANDY and know that there’s a place for black women in sketch comedy that exists beyond the white male gaze. The white male gaze is fine but it’s time for black women, white women and POC in general to frame themselves. And it’s time for the world to see how witty and smart we are.

“AMERICAN CANDY: The Fempire Strikes Back” will take place this weekend on Dec 2-3 at 8pm at The Arts Fund Actor’s Center in Brooklyn, NY.  As an added perk, there will be a free, pre-show wine reception 45 minutes prior to each show—so come early!  Tickets are $25 and can be purchased at: fempirestrikesback.eventbrite.com.  If you’re unfamiliar, check out a clip of AMERICAN CANDY below to get a taste of this talented troupe ahead of the show.