We’re living in a Golden Age within the comic book industry.

And the creators contributing to such an Age? Afua Richardson. Brandon Easton. Ashley Woods. Brandon Thomas. Micheline Hess. Alverne Ball. Jason Reeves. Regine Sawyer. Chuck Collins. I could go on and on, but I suggest doing a Google search on these creators, and also heading here.

Let me repeat this: we’re living in a Golden Age.

As a fan and creator I love it. It keeps my wallet/ Pay Pal account screaming bloody murder as a fan, and as a writer I’m always seeking to learn more about this comics game, while all of these examples of great storytellers keep me hyped day in and day out

Heck, look no further than the recent 2016 Glyph Comics Awards announcements and try to tell me that all of those 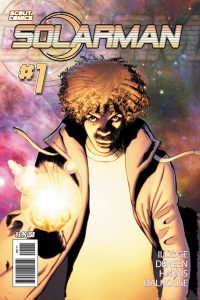 creators and titles don’t keep you driven to read more great books, and to create your own awesome works of super heroics, or maybe even an everyday slice of life comedy/ drama.

The folks at Scout Comics understand this. With the upcoming release of the relaunched SOLARMAN, they see that fans are looking for something new, and fresh. Something that will have them knocking down the doors on #newcomicswednesday. A book with a creative crew, and cast of characters that reflect not just one particular segment of the comics buying audience.

Enter stage left SOLARMAN. Originally created under the Marvel Comics banner in 1989, the title is now undergoing a reboot for current comic book audiences, courtesy of publisher Scout Comics. The comic was originally written by Stan “The Man” Lee, creator of such acclaimed characters as Spiderman, the X-Men, the Fantastic Four, the Avengers, and a host of other popular Marvel properties. SOLARMAN creators David Oliphant and Deborah A. Kalman have teamed with Scout Comics, and a talented group of creators to bring SOLARMAN back to current audiences.

As described in the synopsis for the series “SOLARMAN is the story of Ben Tucker, an African-American teenage hacker who lives in his father’s basement – not exactly how he pictured his life going. When a terrifying alien cyborg attacks a private space station conducting classified experiments, Ben is exposed to a strange, powerful energy source. Ben’s new, incredible power forces him to go on the run, fight the government, and battle for the future of the entire world.”

SOLARMAN creative team members Joseph Illidge and N. Steven Harris recently took some time to talk about the upcoming series, their working process as creators, and a few other topics.

“The creators of SOLARMAN, David Oliphant and Deborah Kalman, felt this was a good time to bring the character back into the light. The character is a Black male teenager at a time in American society when that demographic is under undeniable assault by forces outside of the Black community and within it. Having a superhero representing that demographic, to some degree, opens up a lot of story and dramatic possibilities,” Illidge explained when asked about the relaunch of SOLARMAN.

“Ben’s journey deals with his exposure to extraterrestrial technology, but at the core is an emotional undercurrent. The SOLARMAN miniseries is going to address him confronting those emotions head on, and experiencing a degree of pain and suffering on the road to becoming a hero.” 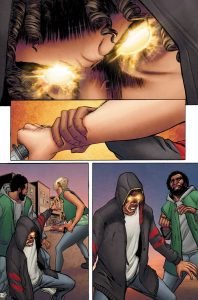 As mentioned before Scout Comics has composed a talented team of individuals, with a large collection of experience within the comic book industry. These talents have combined to bring Ben Tucker’s story to audiences, both familiar and unfamiliar with the SOLARMAN brand.

“Co-writer Brendan Deneen is easy to work with on script, and is open to new ideas. Illustrator N. Steven Harris is a master storyteller, having worked on characters like Deadpool, Captain America, and Batman, to name a few. Steve is detail oriented, and applies thought to his work to the level that I see the multiple layers of his storytelling upon repeated views,” Illidge said.

“Color artist Andrew Dalhouse has brought his best for top publishers, including DC Comics, Valiant, and Dark Horse. He brings an intuitive sense to his work and takes Steve’s work to the next level. Letterer Marshall Dillon is much more than that, and a consummate professional. Everyone involved is putting their best efforts into SOLARMAN, and I couldn’t be happier with the collaboration.”

With working on such established/ licensed properties creators often realize that they are working on characters that aren’t necessarily their own. In many circumstances these writers and artists are given the freedom to play within the universes of these respective characters, with not many restrictions. In other cases though, there is a strong through line that has be followed, coming with a strong set of rules on what to do or what not to do with the property being worked with.

Harris and Illidge explained that with the relaunch of SOLARMAN they were provided with minimal restrictions when bringing this character back to the forefront to today’s audiences.

“Fortunately, any restrictions that I have had in my experience with DC Comics, Marvel, Voltron, or any other licensed property, were very minimal. Now, I have had nightmares with licensed characters with other companies. But that has not been the case here, or for most of my career. Now at the start of a project, I usually do sketches of the characters to get a feel of their look. However, with SOLARMAN, this was a total redesign effort, so the pre-existing history of SOLARMAN isn’t that of a Batman, Deadpool, Catwoman, or Voltron,” Harris explained.

“The opportunity to create something special is pretty much limitless. That process starts with Joe giving me an idea of a particular character, along with some looks of various actors as a guide and I would go from there. Joe, Brendan and Dave would then comment and I would either make adjustments or ignore them (joking).  There was absolutely no ignoring of anyone.  Taking in feedback and following direction is all part of my training as a professional commercial artist. I have outlets where I am the master and co-master of my own universe.”

“SOLARMAN is David and Deborah’s baby, so they naturally have certain requirements. That said, the team and I have been afforded a lot of freedom, so it’s a good balance. Everyone’s goal is the same when it comes to the story of SOLARMAN,” Illidge said.

Following on the heels of this Harris went on to expand further on how it felt to get an opportunity to help re-brand an already existing property.

“Well I didn’t do much research of the old character. That wasn’t really intentional. Joe just got me started on some designs. I took the idea of SOLARMAN, or Ben Tucker, being a bi-racial child and used that as a starting point. Then I considered his general situation and tried to show that on his face. Joe also wanted the character to have a 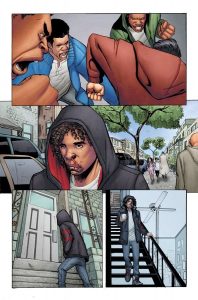 “Now, with Ben’s SOLARMAN look, we just wanted to go crazy, energetic, and expressive. Helping to re-brand an already existing character? Haven’t really thought of that aspect. Now I am getting nervous. Actually, I look forward to when the book drops. Already, there seems to be a lot of interest in the property, from fans and media. I am confident we will not disappoint.”

In today’s pop culture landscape audiences are used to seeing no shortage of “re-imaginings” or “re-beginnings”. Just look at examples such as the relaunched Star Trek, and James Bond franchises, or even the countless relaunches that Marvel and DC Comics take part in every year. In a field where reboots and relaunches are often the name of the game, both creators explained what they were attempting to bring to separate the SOLARMAN series from such re-brandings.

Illidge explained, “Reboots and relaunches these days happen every year. Really. Every year. Okay, maybe every five, for the most part. The revamp of SOLARMAN took much longer. I think David and Deborah wanted to bring the hero back now for good reasons, one of which is to tackle social issues within the wrappings of superhero fiction.”

“With few exceptions, and that may not be plural, a teenage Black male lead in American superhero comics is hard to find. Spiderman with the Black/Latino character Miles Morales, is the only one that immediately comes to mind. Also, the visual team of N. Steven Harris and Andrew Dalhouse is long overdue, and you won’t find that anywhere else. For now.”

From an artistic side of things Harris said, “As much of a comic head as I was in the 80’s, I regret to say that I didn’t know about the original SOLARMAN. I have since seen the original design, and I think we definitely made the character current and have taken into account current issues and real issues in general that may not have been articulated in the 80’s.”

“I guess that I try to give each character a particular look and a story within their look, body language, when I set up scenes, paying particular attention to storytelling. Making sure all the moving parts make sense when they are put together. Because in my mind those parts are definitely moving.”