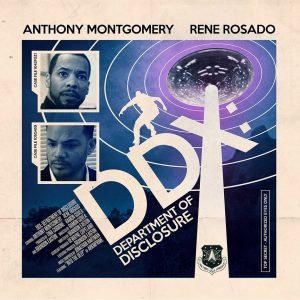 DDX: Department of Disclosure details the final mission of an Air Force intelligence operative (Montgomery) who stumbles upon data regarding extraterrestrial life on Earth. Through a series of hacked government interviews and found footage sequences, William uncovers the sinister truth behind the mysterious events surrounding him and learns how far the intel community will go to protect their secrets. Shot in an innovative style mixing gonzo interviews, declassified military footage and documentary storytelling, DDX pushes the boundaries on what we consider “real” and leads to a twist that further blurs the lines between fiction and non-fiction.

Writer/Producer Brandon Easton and Director/Producer Ramon Govea bonded over their mutual love of science-fiction and conspiracy theories and wanted to tell a story that spoke to their influences as well as current news regarding the U.S. military’s involvement with extraterrestrial research and UFO documentation. No stranger to speculative storytelling, Easton is a screenwriter with a career in television and graphic novels having earned an Eisner Award nomination and multiple Glyph Award wins over the last five years. Easton was a writer on season two of Agent Carter and has written well-regarded graphic novels like Andre the Giant: Closer to Heaven, Vampire Hunter D: Message from Mars and M.A.S.K. (Mobile Armored Strike Kommand). Ramon is a content creator with multiple directing and producing credits who currently works behind the scenes in production finance, digital storytelling development and currently consults on two graphic novel series, Accel and Incidentals, from Lion Forge Comics.

An alumni of the 2015 Disney/ABC Writing Program, Easton wanted to showcase diverse faces and voices in a genre that typically does not feature people of color. “I’ve always been shocked by the lack of African-Americans and Latinos in conspiracy-driven science-fiction. If you visit your local barbershop in the Black community, you will hear some of the greatest conspiracies known to mankind, yet this is rarely reflected in UFO stories in cinema and television. We wanted to change that,” Easton said in a recent interview at San Diego Comic Con.

DDX: Department of Disclosure is currently available to stream on Vimeo (https://vimeo.com/230158071) and will be screened at Stan Lee’s LA Comic Con in October 2017 and Eagle Con at Cal State Los Angeles in early 2018. Collaborating with Govea and Easton are: Producer, Tina Carbone; Associate Producer, Dewayne Copeland; Directors of Photography, Joey Rasool and Aric Abraham; Visual FX artist, Gabriel Koerner; and Sound Design, Jordan Bennett. Music composed by Jonathan Hartman; with an original song “Into the Deep” produced and performed by Shai Dawn.