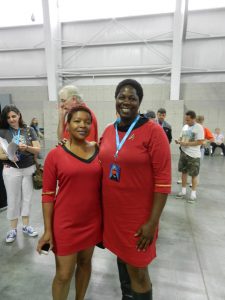 Unless you’ve been trapped in the Delta Quadrant on the weekend of September 2-4, then you know that fans from all over beamed into New York’s Javits Center for Star Trek Mission. The event was a convention for Trek geeks to come out and celebrate 50 years of all things Star Trek.

Produced by ReedPop, the same crew that puts on the various Comic Cons, this weekend was a celebration of the shows, movies, books, games and the fans that have carried on the vision of Gene Roddenberry’s wagon train to the stars.

Not as big as its Comic Con cousins, Mission was a quality affair for the Trek lovers of the world, and fans that came were given plenty of space and treats to enjoy themselves. Two of the “Uhura’s” I ran into at the con, weren’t just Trekkers, they’re ministers here in the city. Since being a little girl, Kym watched Star Trek in syndication on channel 11 here in New York, while Bridget came to Trek later on as a teen with the Next Generation. For the two ladies, it was the message of togetherness that spoke to them, in addition to wanting to build that vision of inclusiveness in the real world. 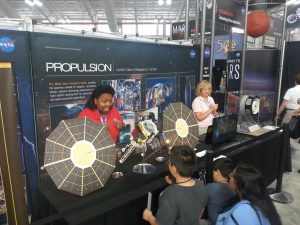 I was also able to speak with Nancy Hall, a research scientist with the NASA Glenn Research Center, working in fluid physics. Her path to NASA started with encouragement from her 6th grade science teacher and from watching Star Trek with her father as a child and later the Next Generation in college. In talking about how she made this a career she said that, “A lot of it came from watching science fiction. I’d known about NASA so I took all the math and science courses with the goal of working in science.”

She also stated that she was lucky enough to work right out of college at the NASA Glenn Research Center having been there for 26 years. Her advice for any young girls and boys of color is “...don’t give up on your dreams do what you want. I originally wanted, even though I love science, I wanted to go into astronomy, but I was told you couldn’t make any money there so I went into computer science. But after a semester I saw what people were doing in space science and I would say “if your dream is to work for NASA, if your dream is to work in space, don’t give up on it”. Find someone in the area to talk to, never give up. If you make what you like to do a career, you’ll love it.” 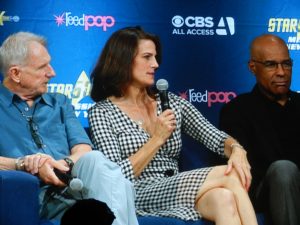 For the dedicated Trek fans that came out there were some great panels and talks with the casts of the Next Generation, Deep Space Nine, Voyager, and Enterprise. Two of the biggest stars to make appearances were Walter Koenig, and the Captain himself, William Shatner. One of the most poignant statements from the con came from DS9’s Quark, actor Armin Shimerman. He was asked if the Ferengi were a stand in for Jewish people, his response  was very intense. He stated that “Here in America, the Ferengi are considered Jews, but when you travel the world and go to places like the UK, they’re Irish, and in Australia they’re Chinese. Wherever you go you have outsiders and that’s what the Ferengi are. The outsiders with their own rules and codes.” 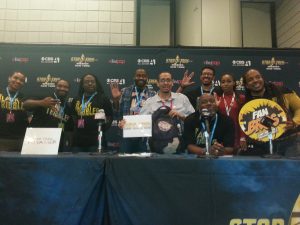 The Black Tribbles out of Philly, put on two great panels, one called Star Trek into Blackness, where they  talked about the most prominent people of color in the Trek universe in their very Tribble way. They followed that up with a panel talk with David Gerrold, the original series writer of the episode the Trouble with Tribbles. We learned the origins of the name Tribbles, his role in the DS9 episode that travels back to that episode, and his induction into the Tribble Nation. These cats like to get their geek on.

I stepped out of my role as a media person to participate in the FanBros panel Attack of the Khan: Next Gen vs. DS9. My role was to present the best case for why DS9 is the better show, while the competition was formidable, my teammate and I were able to take it to the next level where we battled the winners of TOS vs Voyager. And on Sunday, the DS9 team was able to bring it home for the win by beating the Voyager crew or as the Jem’hadar say “Victory is Life!” 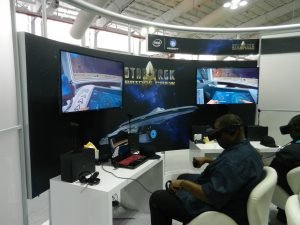 But the ultimate treats for con goers had to be the Captain’s Chair from the Enterprise, courtesy of Star Trek Original Series Set Tour. This set was rebuilt from detailed blueprints to be a near perfect replica for the production of online fan films, and now the entire set is located in upstate New York. Fans were able to sit in the chair and get their picture taken. And if just sitting in the chair wasn’t good enough, the kind folks from Ubisoft let us play their VR game Star Trek: Bridge Crew. I’ve done other VR games and this one is a few degrees away from a Holo Deck. The immersiveness, gameplay and just general all around badassery made this game one of my top five highlights of the whole weekend.

Later that evening the folks at Star Trek Timelines gave one hell of an after party, with special guest John de Lancie. To sum it up, the weekend truly was a fantastic, fun filled celebration that Star Trek creator Gene Roddenberry would have been proud of.

George Carmona 3rd is an Artist / Designer, former Milestone Media Intern, former DC Comics paper pusher, book lover, lifelong comic geek, has been in 4 Star Trek novels and rocked the tactical station on the Bridge Crew Simulator.  You can find his work at FistFullofArt.com or follow him on twitter at GCarmona3.