So admittedly, I’ve never been much of a Star Wars fan, so it was a surprise (a pleasant one) when my 11-year old daughter Yazmyne expressed to me her interest in the series.  According to my daughter, she developed an interest in Star Wars after watching an episode of Star Wars Rebels a cartoon that airs on Toon Disney.

From there, she began to look into Star Wars as a whole via the Internet and became “hooked”, so much so that she was Darth Vader this past Halloween.  To put it into perspective, my 11-year-old daughter is 5’8” tall and a girl (obviously), so it was a surprise to myself and our neighborhood to see her sporting a costume representative of one of the most iconic film characters of all time. I must say she pulled it off well.

Next she wanted gear, so I went through the trouble of investing in any type of Star Wars apparel I could find anytime I was clothing shopping for her. I know, I’m an awesome mom.  Finally, the day she had been awaiting came, and we were off to see the film she had bugging me about for the last couple of months, Star Wars: The Force Awakens (3-D). 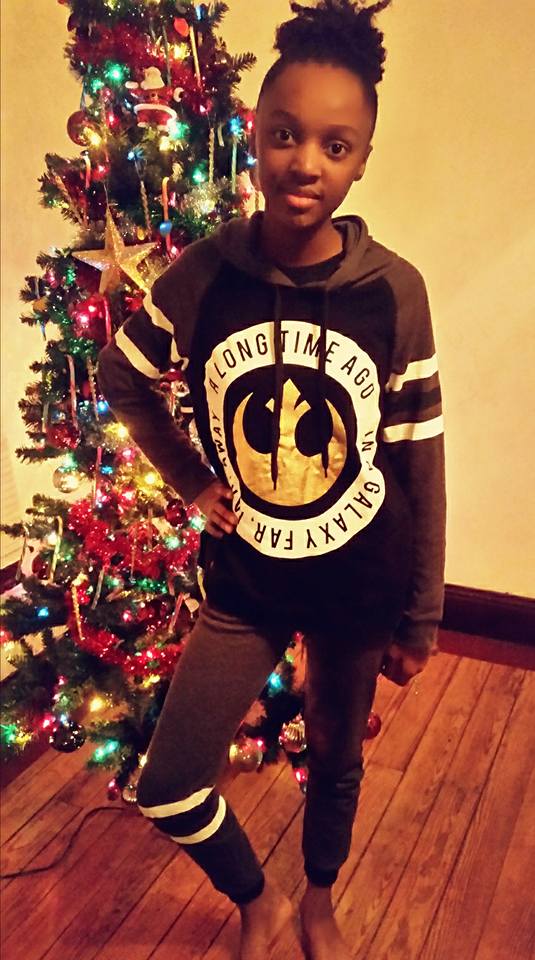 After loading up on popcorn and snacks, we waited in line anxiously, and landed the perfect seats.  The movie in my opinion was great, and was successful in inspiring my own personal interest in watching future films, as well as playing catch up on the older ones. The best part of this, however, was having an opportunity to bond with my

daughter through something unique to her in our family, and allow her to express her diverse tastes as a part of a generation of young brown girls who’s whose interests aren’t typically Sci-Fi related.  As long as she continues to show interest in positive subjects, I will always support her in any way I can.  I’m also proud to see she is joining the ranks of black girl nerds everywhere (including her mommy).

Tiara Janté is a Writer/Journalist, budding Social Media Analyst, and Sci-Fi & Fantasy enthusiast.  She is currently in the process of completing her first novel, Merged, a dystopian themed Sci-Fi thriller. You can stay up to date with her work via her blog at: http://www.tiarajante.net/