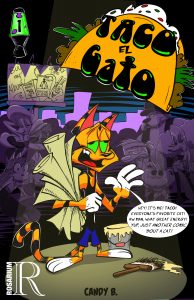 In the smoggy, run-down town of Ditz City, cats and dogs don’t get along. A very unfortunate situation for Taco Fluffy, who is constantly caught in the middle!

Taco is an offbeat, adopted cat with a soul of a dog and the eagerness of a cat, who has the uncanny ability to turn any situation from good to bad and from bad to worse. He often drags his recluse sidekick, Furr-ball, kicking and screaming along for the ride—with his sadistic nephew, Mini, often lurking in the shadows, loving nothing more than to cause Uncle Taco pain.

With a wild cast of characters (from a long-lost father to a bloodthirsty pack of wild biker dogs), Taco El Gato pokes fun of all life (earthly and supernatural) has to offer in a city that could only be the half-crazed love child of Los Angeles and Toon Town.

Candy Briones has always had a love for cartoons. Developing stories with her toys and drawing mermaids and E.T. in her sister’s textbooks are among her most cherished childhood memories. By 2000, she had already created Taco El Gato, inspired by many ’90s anthropomorphic characters. After turning 20, Candy was a full-time cartoonist, traveling across the country creating caricatures and other artwork. Candy has worked mostly in animation, including many independent projects as well as work such studios as DreamworksTV and Smorgasborg as a storyboard artist, all the while constantly working on various Taco El Gato projects.

Rosarium Publishing just successfully ran an IndieGoGo campaign to move to offset printing! Check out updates on the shift over here on the IndieGoGo page!
Rosarium website: http://www.rosariumpublishing.com